There are many reasons why Richard Dawkins and several other prominent atheists refuse to participate in debates against Creationists.

It gives the other side equal footing and a legitimacy they don’t deserve.

The other side often celebrates the debate’s occurrence — arguments be damned; the fact that the debate happened at all means there’s a debate to be had!

Not all atheists shy away from debates — Dan Barker and Christopher Hitchens do them on a regular basis — but there are good reasons to avoid them.

Personally, I don’t do debates. Partly because I’m not an expert in science or philosophy, and partly because I don’t always see the point. But I’m happy to do dialogues with Christians — there’s no “winner” and the focus is on understanding the other side and breaking down stereotypes.

The Moody Church in Chicago recently held a religious debate that dealt with several God-related questions: Does God Exist? Is God Necessary for Morality? Is Christianity Detrimental for Society?

They invited Erwin Lutzer — Senior Pastor of the Moody Church — to defend the Christian perspective… and activist Rob Sherman to represent the atheists. 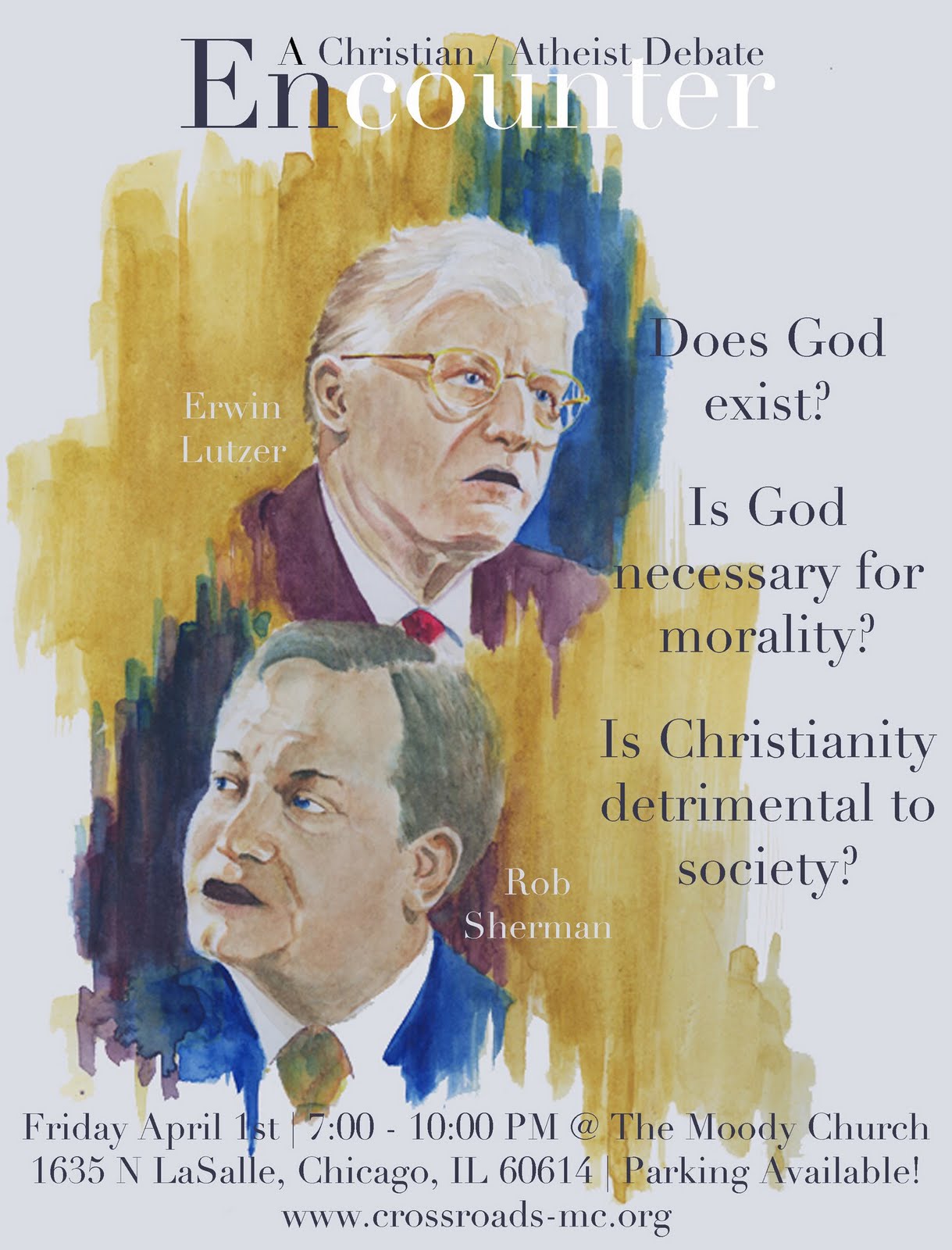 Ryne, an atheist, was looking forward to the exchange, but he wasn’t expecting to *facepalm* the whole way through it…

Knowing what Sherman has been involved with in the past, I fully acknowledged that he would probably be a bit of a dick. I hoped that he was respectful and polite, but I would not be surprised if insults and ridicule were a core part of his style. I also expected that Lutzer would be articulate and evoke creationist arguments and present them in a way that sounded believable. That was what Sherman was there for: to show that Lutzer’s arguments were unfounded. In this, I expected Sherman to know a few things about the atheistic viewpoint regarding science, philosophy, and ethics. I could not have been more wrong. This debate was a disaster.

You need to read the whole writeup to really get the full impact, but let me pick out one point in particular. When discussing the origin of life — how life could have arisen without a god — Sherman did something I’ve never seen in a debate:

He admitted that he did not know the science behind the arguments and talked about how his daughter was a more scientifically minded person. I was astounded that he had such a lack of evolutionary knowledge. If it had stopped there, I would have been a little disappointed at Sherman’s lack of preparedness, but he insisted on making it worse. He then called his daughter up to the stage to provide an explanation of how life could arise from nonlife. The moderators tried to stop this before it happened, but Sherman was insistent. His daughter Dawn got on the stage and tried as best she could to explain abiogenesis. Putting her on the spot like that was unfair to her and the audience. She clearly had some idea of what she was talking about, but her lack of preparedness made the whole idea sound flimsy. Sherman cut her off after about a minute, and simply said that this proved that life could have arisen without design.

Rob’s daughter is a senior in high school…

*Hemant shakes his head in disgust*

Even Ryne, an atheist who wants to convince his Christian girlfriend there’s something to our perspective, admits this was a lost cause from beginning to end:

In closing, I think this debate was damaging to the people present. There is no possibility that any Christian was even partly swayed to the atheistic view. In fact, the opposite occurred. I talked with my girlfriend about what happened, and she said that the night reaffirmed her faith in Christianity. I am sure this would be echoed by any questioning Christian there.

So thank you, Rob Sherman. Thank you for so misrepresenting atheism that I consider everyone at that event a lost cause. In the future, please keep your mouth shut.

So we now have a new reason not to debate Creationists: It’s possible that our side will come off looking even more ridiculous than their side.