‘In God We Trust’ Signs Making Their Way Through Missouri… April 2, 2011 Guest Contributor

‘In God We Trust’ Signs Making Their Way Through Missouri…

Dee Wampler is one of those Christian lawyers who thinks separation of church and state is a myth. And, like many Christians who love their revisionist history, he seems to have a lot of influence.

Wampler is currently on a mission to have the phrase “IN GOD WE TRUST” posted in every City Hall in the state of Missouri.

He recently sent the following letter to one city mayor (and possibly several others): 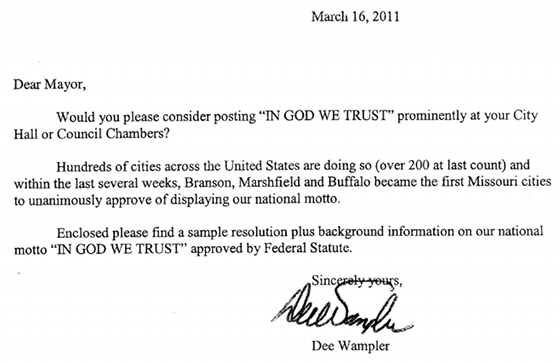 This is that sample resolution (you know, just to help nudge it along): 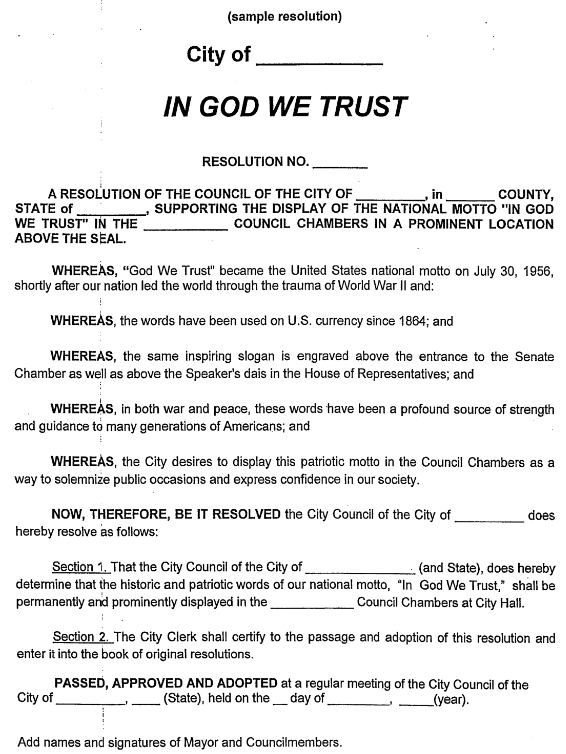 So far, just like he mentioned in the letter, Wampler’s been on a roll.

In Taney County, the vote was unanimous in favor of the motto:

Taney County officials have yet to state where they intend to place the motto and the cost of initiating the measure.

In the city of Buffalo, the vote was also unanimous:

Joining a movement that Mayor Jerry Hardesty said is sweeping the nation, the Buffalo Board of Aldermen Monday night voted unanimously to put “In God We Trust” logos on the outside and inside of the City Hall building and on other items such as letterhead.

Dee Wampler, an attorney in Springfield, has been spearheading the movement in southwest Missouri, and he sent Hardesty a packet of material and also made a presentation at Monday’s meeting. City attorney Travis Elliott also gave his approval, Hardesty said.

It was unanimously approved in Jasper County, too:

A Springfield attorney’s request to post “In God We Trust” at the Jasper County Courthouse and the Joplin Courts Building has been approved by county commissioners.

John Bartosh, presiding county commissioner, said the request was embraced by the commission “because we thought it was a good idea.

“We should have done it before, without anybody asking us,” he said.

Bartosh noted the commission did discuss the request with legal counsel, adding: “He didn’t see a problem, and we wanted to do it.”

Danny Ferguson is an atheist who happens to be a member of the Adrian, MO city council. The mayor of the city, Larry Ritter, plans to raise the issue of the IGWT phrasing at the next city council meeting on April 11th.

At least in Adrian, the vote won’t be unanimous.

Danny writes in an email:

I have notified the mayor and city attorney that I intend to vote against this. I also contacted the Freedom From Religion Foundation. Even if they can’t do anything about it, I want people to be aware of what is happening…

… I could just quietly vote against it and not draw attention to it. On the other hand, this is an opportunity for me to have both my vote and a public statement in favor of church/state separation entered into the permanent public record of my city. Depending on how prominent the display is, it could be an annoyance and discouragement that I face at every meeting…

It could also be very costly, depending on how large the display is and how much the city is going to have to pay when the lawsuits start to roll in.

This is why it’s so important to have voices of reason in local governments. The IGWT signs (in all their incarnations) won’t change how the governments are run, but they symbolize the notion that atheists are not welcome in those cities. The fact that they’re unconstitutional is obvious, but even if they weren’t, there’s no good reason to promote that message. There are several churches in Missouri where you can say that phrase all you want. The government is supposed to be for all the citizens, not just the religious ones.

April 1, 2011
British Columbia to Get Atheist Bus Ads
Next Post