Non-Serious Catholics Are More Tolerant Than You Think

You love data, right? Of course you do, how silly of me. Everyone loves sifting through survey data. Well, the Public Religion Research Institute released a fascinating survey last week on the political views of Catholic Americans. One finding getting attention is that Catholics are particularly likely to support marriage equality:

Catholics are more supportive of legal recognitions of same-sex relationships than members of any other Christian tradition and Americans overall. Nearly three-quarters of Catholics favor either allowing gay and lesbian people to marry (43%) or allowing them to form civil unions (31%). Only 22% of Catholics say there should be no legal recognition of a gay couple’s relationship.

The numbers are promising, particularly for questions that explicitly describe a civil marriage “like you get at city hall”: support jumps 28 points, from 43% to 71%.

This must mean that the Catholic church is evolving and teaching its followers to be more accepting and supportive, right? 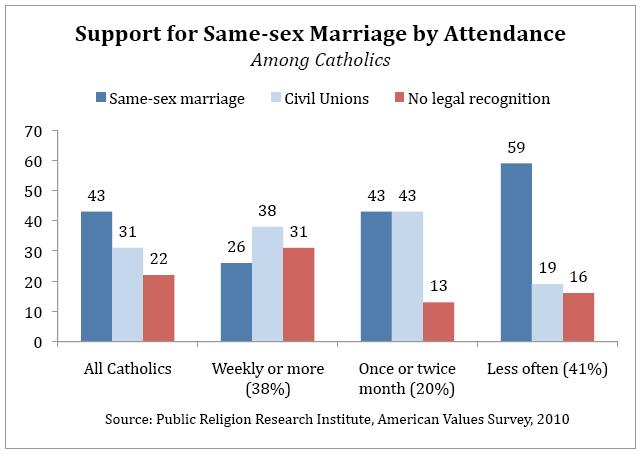 To summarize: The less frequently the person goes to church (or reports to, at least) the more likely they are to support the right of gays to marry.

I suspect there’s a “cultural Catholic” phenomenon playing into the equation. For example, look at another of their findings:

People might identify as Catholic even if they don’t believe the dogma or disagree with their church’s stance.

On the surface, I can’t say that the teachings of Catholicism are friendly to gays and lesbians. It seems plausible to me that there are just a lot of people identifying as Catholic who don’t believe those teachings. And the more seriously people take their religion, the less likely they are to support equality.