Do Pastors Really Believe in Hell?

There’s been plenty of controversy over Pastor Rob Bell‘s latest book Love Wins and the question of whether or not hell exists (Rob says it does).

But it raises an interesting question: How many pastors really believe in hell?

Sure, we often hear about those who preach hellfire, but why is it that the concept of Hell seems to disappear when someone dies?

Caleb Wilde, a funeral director, puts it this way (emphasis his):

I have worked about 3,000 funerals in my 10 years as a funeral director and I have NEVER heard a pastor state conclusively that the person they are memorializing is going to hell… although I’ve heard thousands of messages that state CONCLUSIVELY that the deceased is in heaven!!!

There’s been some fancy preachwork done by pastors for those who lived less than clean, God honoring lives. I remember one pastor saying about a man who blatantly hated God, “This man didn’t like God, but he was a man who loved the outdoors. And anybody who loves the outdoors is like a lover of God because God created the outdoors.”

Honestly… I don’t think pastors are actually lying (some of them, like the example I used above might twist the truth)… I think pastors honestly have the hope that — despite evidence to the contrary — the deceased finds himself or herself in the presence of God.

Of course, they don’t. They’re dead. And they end up in the same place whether it’s a heart attack, a suicide, a murder, or an accident.

When a pastor delivers a eulogy, though, all of them are seemingly in the presence of God… even the people who never went to church or who blasphemed God on a regular basis. (There must be a hell of a lot of death-bed conversions in their minds…)

That’s what pastors do. They offer false hope, no matter what the situation is. No one wants to hear that their loved ones are in hell, so a pastor will rarely admit that. The question is whether they honestly believe the deceased is in Heaven or whether they’re just lying to the audience to make everything seem better. 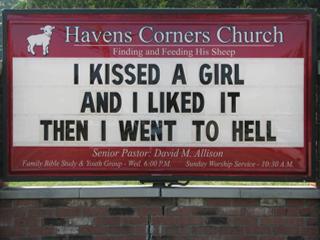 Since most of you are atheists, I wonder: Have any of you been to a funeral where the pastor said the deceased was going to spend eternity in Hell?

March 28, 2011 Non-Serious Catholics Are More Tolerant Than You Think
Browse Our Archives
What Are Your Thoughts?leave a comment