Here’s what I know about Senate Bill 1619, filed recently by Illinois State Senator Heather A. Steans:

At least the idea of the bill is a good one. We need proper, better sex education in health classes. Don’t we want children to be more educated about the subject?

Of course not, says the Illinois Family Institute. Laurie Higgins is fuming about it.

SB 1619, otherwise known by its obfuscatory title, “Personal Responsibility Education Act,” is yet another attempt by legislator-ideologues to use public money to normalize sexual immorality and perversion by inculcating children and teens with subjectivist, relativist assumptions about sexuality.

Those damn hippie legislators want to use evidence-based programs? NEVER!

[The bill r]emoves a provision that requires all public elementary, junior high, and senior high school classes that teach sex education and discuss sexual intercourse to emphasize that abstinence is the expected norm.

There’s nothing “abnormal” about not being abstinent. It’s a choice everyone has to make for themselves. Schools would be doing students a service by letting them know the truth about the consequences of having sex — you could get pregnant. You could get a disease. There may be emotional consequences. There’s also the possibility that nothing bad could happen at all.

And who knew “comprehensive sex ed” was such a dirty phrase?

The truth is comprehensive sex ed is incomprehensive, distorted and propelled by a subversive sexual ethic. Comprehensive sex educators seek to tell kids everything possible about sex except of course anything that challenges their subjectivist, relativist presuppositions and libertine social and political goals.

What?! Not EVERYTHING POSSIBLE! I thought educators were supposed to limit students’ knowledge. I’ve been teaching Math all wrong…

She then selectively lists the horrible, awful things these evil “comprehenders” want to teach children (PDF) — courtesy of the Sexuality Information and Education Council of the United States (not an official government organization, for what it’s worth). You can click on the image to enlarge it:

Umm… yep. All of those things are factually true. And the earlier children learn it, the better off they’ll be.

Gay people do, in fact, exist. And they can be in committed relationships. (Even if the bigots won’t allow them to get married.)

By the time children get to high school, what does SIECUS suggest they know? Here’s what Laurie selectively highlights:

Again, most everything on there is factually true or just good advice.

Except for one: “Young teenagers are not mature enough for a sexual relationship that includes intercourse.” Really? No doubt most of them aren’t. But I’d guess that there are a few of them with more maturity than some college students or adults who jump into sexual relationships.

In any case, that one line sounds like advice that ought to be geared toward younger kids, who are discovering their sexuality for the first time…

But SIECUS actually lists that as a Level 3 item (for ages 12-15), where it might actually make more sense.

Deliberate distortion? Or just another example of a Christian group not double-checking readily-available facts?

(It probably doesn’t matter. Who needs facts when you have Jesus on your side?)

Laurie’s recommendation at the end of all this?

Illinoisans should oppose this bill like their kids’ lives depend on it.

We need to support this bill like our kids’ lives depend on it.

The abstinence-only, no-sex-before-marriage, don’t-touch-another-person-that-way, homos-won’t-exist-if-we-don’t-acknowledge-them, lame excuse for abstinence-only sex education has made students across the country all the more ignorant and irresponsible.

If they want to wait until marriage or be sexually active, that’s their choice. But they deserve to know the truth about what they’re stepping into in both cases. 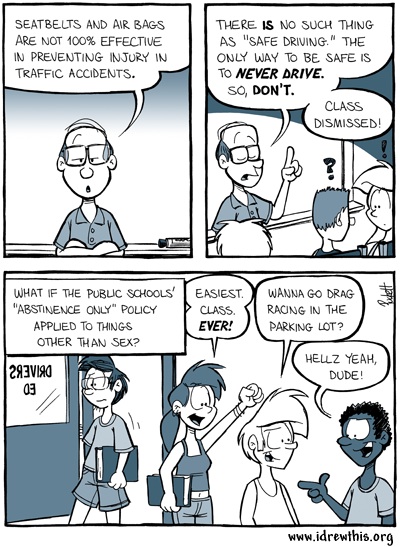 The Illinois Family Institute (and all the other Christian Right groups) don’t want that. They think children are too immature to make decisions like that for themselves. They believe parents should control their kids’ genitalia until they’re marrying their opposite-sex spouse. (See Purity Balls.)

There’s no reason to oppose this sensible bill. If you live in Illinois, here’s a way (via Planned Parenthood) to contact your state senator so you can urge them to support SB 1619.