You know by now that Rock Beyond Belief, the rally for atheists in the military, was canceled due to restrictions put upon organizers by Fort Bragg officials.

According to Sgt. Justin Griffith, one of the problems officals had was that the speakers/performers never issued a “Statement of Intent” saying we were coming.

That was because we were never told to issue such a statement… It’s not like the Christians had to do that for their (similar) event.

But forget the fact that it’s too late. The speakers are sending them now!

I wish to put clearly on record my strong intention to attend, and speak at, the Rock Beyond Belief festival at Fort Bragg, now sadly cancelled because of (blatantly discriminatory) lack of support from the officer commanding Fort Bragg. ‘Statement of intent’ is putting it mildly. I was hugely looking forward to it, and it was, indeed, my main reason for travelling all the way from England, at my own expense. I also announced my intention to accept no honorarium, so keen was I to support the festival. The suggestion that the festival could not have filled a large hall is absurd. Even when talking on my own, I regularly draw enthusiastic crowds by the thousands, especially in the so-called ‘bible belt’ where beleaguered non-believers flock to hear somebody articulate what they have long thought privately but never felt able to speak.

Rapper Baba Brinkman also said no to an honorarium:

It has recently come to my attention that questions are being raised as to the seriousness of my compact with SGT Justin Griffith to perform at a concert event he was organizing at Fort Bragg for April 2nd called “Rock Beyond Belief”. Please allow me to clear up any confusion by saying that I did confirm this gig with SGT Griffith, in writing, and although my usual fee to perform is around $2,000 I had also agreed in writing to waive my honorarium for the event, because the cause (equal treatment of those with divergent religious beliefs, including atheists) is one I believe in strongly.

The most emotional letter I’ve read comes from Founder and President of The Freethought Society, Margaret Downey:

My heart is heavy as the date of April 2, 2011 approaches on the calendar. It was a great honor to have my name on the Fort Bragg “Rock Beyond Belief” speaker’s list. Bigotry and prejudices abound and now I see that I must cancel all plans to attend, speak and to socialize with people who would have attended.

The purpose of my April 2, 2011 presentation was to not only advise like-minded individuals know that they are not alone, but I was also excited to represent a misunderstood minority. My presentation was written to erase negative stereotyping of the nontheist community and I intended to share a personal story with the audience.

My son served in the United States Air Force as an Intelligence Office and Scientist, but as a young teen, he experienced, first-hand, extreme prejudice at the hands of the Boy Scouts of America — the world’s largest youth group. Our story is compelling. The journey we took as a patriotic family would have enlighten others about the harm of negative stereotyping. We had an important message that would have benefited many.

My family was willing to underwrite our expenses and we did not expect any honorarium in order to participate in the “Rock Beyond Belief” event. The message we wanted to deliver was far more important than any monetary value.

It has come to my attention that the event organizer, Justin Griffith was not previously informed that any “statement of intent” would be required. I am, therefore, officially sending this email to you as proof that my family and I were planning to attend. I was planning to speak and my family was looking forward to helping me tell our story.

I am astounded that Evangelical Christians did not need to meet a “statement of intend” requirement. This is unfair and shows prejudice to a purely secular educational event — “Rock Beyond Belief.”

This incident is now recorded in the Anti-Discrimination Support Network’s narrative database. The United Nations Freedom of Religion or Belief (http://www2.ohchr.org/english/issues/religion/index.htm) occasionally reviews the database and I am sure the Special Rapporteur will find the circumstances very curious. The favoritism shown to the religious community and the mistreatment of the nontheist community is unethical and does not serve to solve diversity appreciation problems.

World peace is not possible until intolerance is replaced with understanding and appreciation of all worldviews.

On April 2, 2011, Fort Bragg officials will miss an opportunity to help gain a better social understanding of a wide variety of beliefs and viewpoints. I do hope that consideration for rescheduling are underway.

Nontheists deserve a place at the table — equally and without prejudice.

My “Statement” isn’t nearly as gripping as the rest of them, but I was ready to attend, forgoing any payment, and I was honored to be invited.

If Rock Beyond Belief gets rescheduled, I’ll do everything in my power to attend the event. It’s ridiculous that Fort Bragg officials set up enough red tape to destroy what would have been an inspiring, memorable event.

On a side note, Justin has a great tattoo of the A Symbol that I had to share: 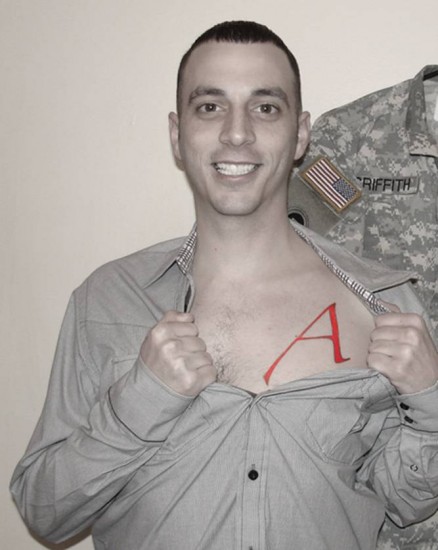 March 23, 2011 An Ode to the Brain
Browse Our Archives
What Are Your Thoughts?leave a comment