The Nones Are Rising

***Update***: An interesting addendum: The BBC reports that the percentage of nones may be rising a lot more than you think:

A study using census data from nine countries shows that religion there is set for extinction, say researchers.

The study found a steady rise in those claiming no religious affiliation.

The team’s mathematical model attempts to account for the interplay between the number of religious respondents and the social motives behind being one.

The result, reported at the American Physical Society meeting in Dallas, US, indicates that religion will all but die out altogether in those countries. 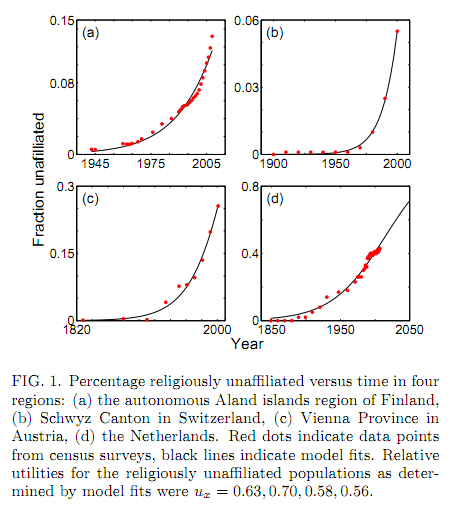 I haven’t had a chance to read the actual article, so feel free to let me know if this is all just wishful thinking and bad use of extrapolation.

We’ve known for a long time that people who fill in the “No Religion” bubble on surveys are not all atheists, but there is good news when that demographic is rising.

It means people no longer identify with a particular religion. Or maybe they’re embarrassed. Or maybe they’ve said “To hell with god; I’m an atheist now.” In any case, it means religion is losing its stronghold on society… at least by a little bit.

Glen Martin writes about this change in California, a magazine for UC Berkeley alumni:

The people who characterize themselves as “Nones” — atheist, agnostic, or no stated religious preference — grew from 8.2 percent of the population in 1990 to 15 percent in 2008. People who refused to state a preference rose from 2.3 to 5.2 percent of the population. The bottom line, according to a Pew Research Center analysis, is “one in five adults does not identify with a religion of any kind.”

In other words, nondenominational spiritualism, secularism, agnosticism, and atheism are on the ascendant. “What we’re seeing is a hollowing out of the center,” says Tom Flynn, executive director of the New York-based Council for Secular Humanism and editor of the organization’s publication, Free Inquiry. “Yes, evangelism is a strong social movement. Millions of people have abandoned liberal mainstream churches for churches with fundamentalist doctrines. But this is a process of polarization — it flows both ways.”

Of those Americans who are Nones, says Flynn, roughly one-third are seekers who eschew religion but not spirituality. The remainder are people who feel no particular affinity for any supernatural force. “And of that remaining two-thirds, 10 percent describe themselves as ardently nonreligious — atheists or dedicated secularists,” continues Flynn. “So we have 35 million people in this country who are distributed along a nonreligious spectrum. That means there are as many Nones as there are African Americans and Hispanics, and more than Jews. In other words, there are enough to demand a place at the table.”

It’s even more exciting to realize that a bulk of the growth has happened within a younger crowd:

Perhaps the best measure of secularism’s popularity among the young and educated is the growth of — for want of a better term — faithless-based campus organizations. “Three years ago, we had 80 affiliated groups,” says Jesse Galef, communications director of the Secular Students Alliance. “Today there are 233. That kind of growth isn’t a blip — it points to a major social movement.”

So let me post a few questions to you all:

Let’s say the “15% non-religious” statistic is accurate. How much higher do you think that number will go before it peaks?

And when will that happen?

And, if there’s another surge in the future, what will be the major cause of it?

March 21, 2011
Visiting Portland for the Northwest Freethought Conference
Next Post

March 22, 2011 An Alternative to ‘A’ Week: Use Your Face
Browse Our Archives
What Are Your Thoughts?leave a comment