I thought the controversy over a Ten Commandments display in Giles County, Virginia public schools was finally over…

The school board wanted to push Christianity into the public sphere. The Freedom From Religion Foundation threatened to sue. The board changed their mind.

But local parents don’t seem to care they’re on the losing end of a future lawsuit. They want a Ten Commandments display up there and they’ll find a way to make it work, dammit!

“I have now put together a formal proposal for a display, that I would like this Board to consider,” said Bobby Lilly, who is the parent of a second grader in Giles County Schools.

Lilly, an assistant commonwealth’s attorney in Pulaski County, presented the Giles Co. School Board with a display that features nine historical documents, during the meeting at Giles High School. Lilly’s display features documents like the Magna Carta, the Virginia Declaration of Rights, and the Ten Commandments. He would like to have the display hung in schools.

“This is a display about the Declaration of Independence, all of the documents that influenced its creation, and the things that came immediately after,” said Lilly. 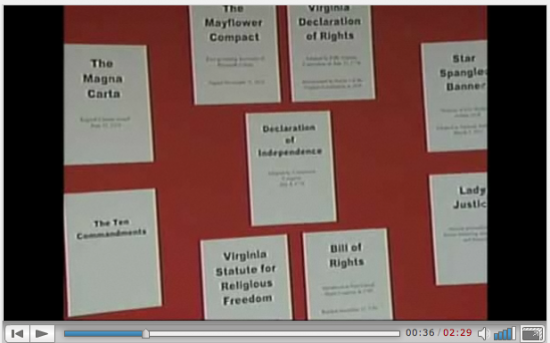 One of these things is not like the other…

Of course, Lilly won’t be explaining what the first four commandments have to do with the founding of our country… or why lying, adultery, coveting, and respect for parents are relevant when they were never etched into our country’s laws either.

FFRF knows that, too.

Freedom From Religion Foundation co-president Annie Laurie Gaylor said they would sue the Giles County School Board, if any alternative display containing the Ten Commandments were put back in schools.

“It doesn’t matter how many pieces of paper they put around it,” said Gaylor.

If the Giles County School Board members don’t vote this proposal down in a heartbeat, they’ll be embarrassing themselves even further. They know what Lilly’s doing is illegal but instead of telling him no, they are letting him think they’ll consider his shady workaround.

Great role models, all these people…

(Thanks to Sean for the link!)

March 18, 2011 Is Eating Meat Compatible with Humanism?
Browse Our Archives
What Are Your Thoughts?leave a comment