The Anti-Gay Parents Should Be Able to Adopt Children March 4, 2011 Guest Contributor

The Anti-Gay Parents Should Be Able to Adopt Children

In Britain, Eunice and Owen Johns are already foster parents to a handful of children and they wanted to adopt more. But local authorities said they couldn’t do it — and Britain’s high court just ruled in support of that decision.

Eunice and Owen Johns, who are in their sixties and have fostered children in the past, claimed they were being discriminated against by Derby city council because of their Christian beliefs, after they told a social worker they could not tell a child a “homosexual lifestyle” was acceptable. The couple had hoped to foster five- to 10-year-olds.

Outside the court, Eunice Johns said: “We are extremely distressed at what the judges have ruled. All we wanted was to offer a loving home to a child in need, but because we are Christians with mainstream Christian views on sexual ethics, we are apparently unsuitable.

“We are prepared to love and accept any child. All we were not willing to do was to tell a small child that the practice of homosexuality was a good thing. We feel excluded and that there is no place for us in society.” 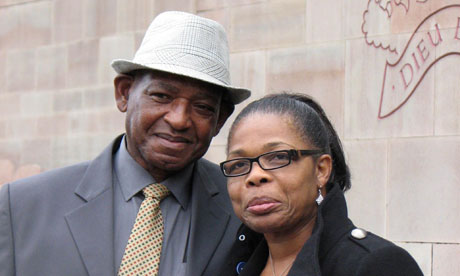 See? The Jones just want to teach their future kids that they will provide them with unconditional love! Unless, you know, they turn out to be gay. In that case, screw ’em.

Here’s how Focus on the Family spun the story:

Simply put, Mr. and Mrs. Johns believe in traditional Christian teachings, including that heterosexual marriage is God’s ideal and that sex outside of biblical marriage between a man and a woman is a sin. As parents, they’ve obviously shared these beliefs with children in their care, and therein lies the crux of the matter.

Focus’ Jim Daly is lying, of course. He must have read the court’s opinion. He must know their Christianity wasn’t the reason for the decision:

In a sharply worded judgment, Lord Justice Munby and Justice Beatson dismissed the couple’s lawyer’s claims as “a travesty of reality”.

“No one is asserting that Christians (or, for that matter, Jews or Muslims) are not ‘fit and proper’ persons to foster or adopt. No one is seeking to de-legitimise Christianity or any other faith or belief. On the contrary, it is fundamental to our law and our way of life that everyone is equal before the law and equal as a human being … entitled to dignity and respect. We are, however, entitled to take judicial notice of the fact that, whereas the sharia is still understood in many places as making homosexuality a capital offence, … the Church of England permits its clergy, so long as they remain celibate, to enter into civil partnerships. We live in this country in a democratic and pluralistic society, in a secular state not a theocracy.”

All that said, the ruling is troubling to me.

What if the couple hadn’t made the anti-gay remarks to the social worker? What if they simply said they were Christians and left it at that?

Then they’d be seen as “fit” parents.

But after they admitted what some of those Christian beliefs actually were?

That seems odd. How many homophobic Christian parents adopt kids in Britain (and elsewhere) on a regular basis? How many of them pass along their anti-gay views to their children all the same? Is anyone stopping them? Nope.

And, on that matter, what about Mormons? Catholics? Anyone else whose views, if spelled out and explained thoroughly, could be seen as the rantings of a lunatic? (You eat your god and drink his blood?) Are they unfit parents? They’re allowed to adopt kids now, so their beliefs clearly aren’t an issue there.

It sounds like the Jones’ biggest crime was opening their mouth when they shouldn’t have.

And how long will it be before a judge stops atheists from adopting children because we’re not providing our kids with the opportunity to worship freely because of our heathenistic godlessness?

That actually happened before.

Check out this Time magazine article from 1970 (Headline: “Can Atheists Be Parents?”):

In an extraordinary decision, Judge Camarata denied the Burkes’ right to the child because of their lack of belief in a Supreme Being. Despite the Burkes’ “high moral and ethical standards,” he said, the New Jersey state constitution declares that “no person shall be deprived of the inestimable privilege of worshiping Almighty God in a manner agreeable to the dictates of his own conscience.” Despite Eleanor Katherine’s tender years, he continued, “the child should have the freedom to worship as she sees fit, and not be influenced by prospective parents who do not believe in a Supreme Being.”

It’s not exactly analogous — for one, you choose your religion, but not your sexual orientation — but what’s preventing courts from denying adoption rights privileges from any parents who hold some unpopular view?

It’s a bad precedent to set.

***Update***: Just to be clear, I find the anti-gay views discriminatory and disgusting. But I would like to know why the Jones’ views are being singled out when many other Christian parents (who can easily adopt children) would likely teach their children that non-Christians are going to hell, or would ostracize the children if they left their faith, or would teach them that evolution is false and Creationism is correct. Is all that really any different than the Jones’ views that being gay is immoral?

***Update 2***: My apologies if I used the terms “foster parents” and “adoptive parents” interchangeably. I didn’t realize there was a difference between the two.

March 3, 2011
Fort Bragg Officials May Put a Stop to Rock Beyond Belief
Next Post

March 4, 2011 The Secret to Wisdom
Browse Our Archives
What Are Your Thoughts?leave a comment