Gay Students at a Christian University Tell Their Stories

Harding University in Searcy, Arkansas is a Christian school (associated with the Churches of Christ). It’s the type of school where students have to attend chapel and abide by a curfew. Sex outside marriage is forbidden. So is pornography.

But, as it turns out, there are gay students even at Harding.

And today, a group of them — some current students, some alumni — are releasing an online magazine where they speak out about their sexuality (albeit anonymously).

I got my hands on this a couple nights ago — it was embargoed until tonight — and I couldn’t put it down. This is honest and powerful. The writers face expulsion if they’re discovered, but that’s a risk they’re willing to take.

This is the opening letter to readers:

Hello to all students, faculty, administration, staff, alumni, and the beloved donors of Harding University. We are the HU Queer Press, and we are presenting our first-ever publication. This is is a self-published work intended to bring attention to the lives and issues of demoralized minorities. Writing is seen as an act of social liberation. We heretics, dissidents and marginalized citizens are far enough outside of the mainstream to be prohibited inclusion in more traditional media, so we opted to circumvent those mediums and create our own. Since the invention of the printing press, leaflets and pamphlets were used in political and social revolutions, like Thomas Paine’s “Common Sense.” We are here to share with you our struggle. We are here to be a voice for the voiceless who are quietly dying insides [sic] the walls of our campus. We want you to know us. We are your friends, co-workers, students, family members, fellow worshipers, professors, athletes, and scholars. We are that guy who you see running on the track or that quiet book worm, that girl doing her hair or that softball butch. We have gone with you to social club functions, and you sit next to us in class. We are your roommates and the best friend to whom you tell your every secret. We are queer. We are gay, lesbian, bisexual and transgender. While the rest of you fall in love with the opposite sex, we share our lives and beds with those of our own gender. All is not well for us at Harding. Our voices are muted, our stories go unheard, and we are forced into hiding. We are threatened with re-orientation therapy, social isolation, and expulsion. We are told stories and lies that we are disgusting sinners who are damned to hell, that we are broken individuals and child abusers. We are told we will live miserable lives and are responsible for the collapse of civilization. We have lost our friends and families, been kicked out of our churches and schools, and are killed, or when left with no option, kill ourselves. We have felt the pain of the deep, dark closet, and we are here to announce that we will not stand for it any longer. This is simply not acceptable. We are good people who are finished being treated as second–class citizens at Harding. We have done nothing wrong and we did not choose this suppression. We are children of God and valuable assets to this campus and the world beyond. We are not asking anything from you. We are here to tell you that we exist and will not be silenced.

Yes, they’re Christians. But they’re also gay, and they don’t want to hide that anymore. The stories in this zine are heartbreaking. Just take a look at a few snapshots from various pieces: 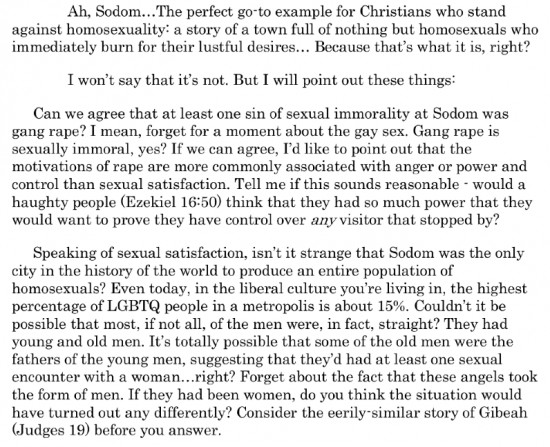 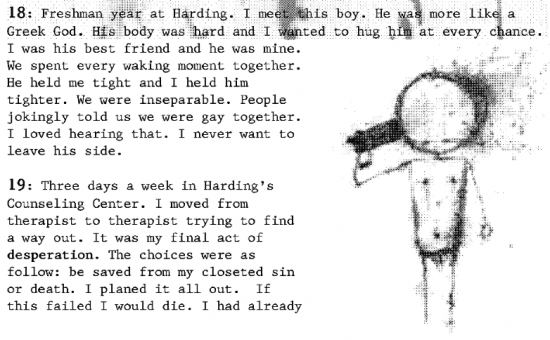 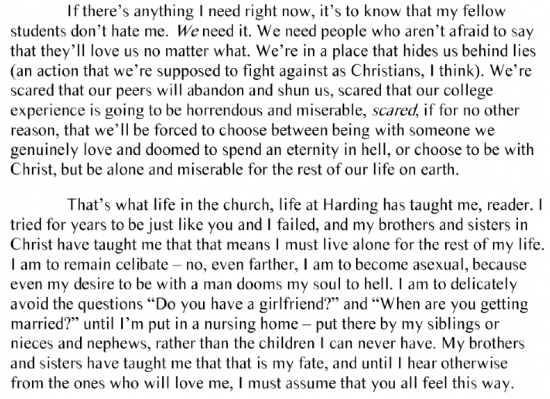 But the goal of this zine is to make students and staff aware that there are GLBT people in their presence. So stop using nasty slurs against them. Think twice about the nonsense Christianity so often preaches about homosexuality. Realize that homosexuality isn’t a “choice.”

Who knows what impact this will have on the Harding community. But it’s going to be hard as hell to ignore it. Kudos to everyone who put this zine together and lots of respect to everyone who contributed to it. It can’t be easy to write pieces like this (even anonymously).

If Christianity is going to change its backwards ways regarding homosexuality, that change has to come from within. This is an inspiring way to raise consciousness in the Harding community.

(via Brett Keller, a graduate of the school, whose piece is a must-read)