Is Rob Bell a Real Christian?

As popular as Christian pastor/author Rob Bell may be, I was surprised to see him as a trending topic on Twitter yesterday. The reason boils down to the content — or at least speculation of the content — of his new book Love Wins: A Book About Heaven, Hell, and the Fate of Every Person Who Ever Lived.

According to the product description:

… Bell addresses one of the most controversial issues of faith — the afterlife — arguing that a loving God would never sentence human souls to eternal suffering. With searing insight, Bell puts hell on trial, and his message is decidedly optimistic — eternal life doesn’t start when we die; it starts right now.

In other words, Rob may be arguing that Hell doesn’t actually exist.

And since evangelical Christians believe the only way to avoid going to Hell is by “accepting Jesus” in your heart, what is Rob saying about Jews and Hindus and atheists and all the other people evangelicals believe are going to Hell? Are they really not? Is there a way to be “saved” that doesn’t involve Jesus?

Rob explains this idea in his own words in this video:

Anyway, as a result of this, a lot of Christians are getting pissed off.

John Piper once wisely wrote, “Bad theology dishonors God and hurts people. Churches that sever the root of truth may flourish for a season, but they will wither eventually or turn into something besides a Christian church.”

It is unspeakably sad when those called to be ministers of the Word distort the gospel and deceive the people of God with false doctrine.

If Bell is teaching that hell is empty and that you can reject Jesus and still be saved, he is opposing the gospel and the biblical teaching of Jesus Christ. You may think that’s judgmental to say that; I think it’s being faithful. (Link)

… fellow soldiers of Christ, blow a clear note. Bark like a dog. Sound the battle-horn! Rob Bell has long been a heretic and grows ever more wicked as he seduces the weak and undiscerning to defy God and His Word.

Tender souls, RUN! Don’t think you can consume his poison but avoid his fate. His path leads to Hell–the very place he denies and defies.

Run for your souls! (Link) 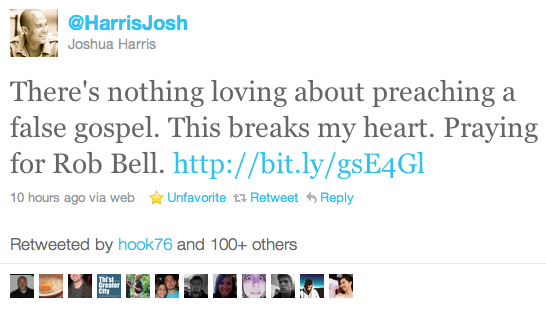 There is chaos in the Christian world, I tell you. They’re afraid because Rob Bell has more influence over younger Christians than just about any other prominent pastor out there. And he’s teaching them lies!

Meanwhile, I’m watching all of this from the sidelines and thinking, they’re arguing about what? The existence of Hell?

Are you kidding me?

This is very simple. I’ll break it down for you.

And neither does Heaven.

And neither does God.

Arguing about whether or not Hell exists is like arguing over whether a unicorn is white or pink. It doesn’t make a damn bit of difference because the whole premise is faulty to begin with.

So while Christians continue to argue about whether Rob Bell is a True Christian® or if he’s a heretic, and as they continue to use the “slur” Universalist to describe him, I’m laughing because the entire debate is silly.

Both sides are wrong and neither side realizes it.

I suppose I have a soft spot for Rob Bell, though, because he was one of the only pastors willing to speak with me when I wrote my book. After we spoke, my publishers asked him if he would be willing to write the foreword to the book and he said yes. It certainly helped my book get out to a Christian market — because if Rob Bell was endorsing it, then it must be worth reading. 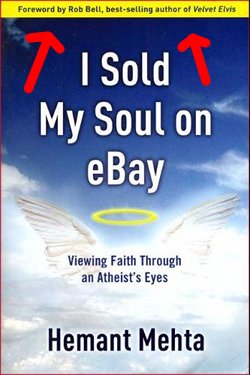 ***Update***: A commenter reminds me of a past episode of This American Life in which Pastor Carlton Pearson stopped believing in Hell.

What [followed were] the swift departures of his pastors, and an exodus from his congregation — which quickly dwindled to a few hundred people. Donations [dropped] off too…