Last week, I mentioned a school district in Illinois where two of the candidates for school board were Creationists.

Another district is now trying to prove they’re even crazier.

Lake Zurich Unit District 95 (home to Lake Zurich High School), in the far northwest suburbs of Chicago, is having school board elections in April.

4 candidates are running for 3 seats.

And all 4 candidates are Creationists.

One [candidate], Chris Wallace, went so far as to say creationism is fact and evolution is just a theory.

Three of the candidates — Jim Burke, Doug Goldberg and Tony Pietro — are incumbents seeking additional four-year terms on the board. Wallace is a political newcomer.

Pietro believes creationism should be taught in science class to give students “as much information as possible” about the origins of life.

“I think we can say this is a theory,” he said Thursday. “None of us were here when man was created.”

As one commenter on Reddit noted, “None of us were here when Jesus ‘came back to life’ but they seem to buy that hook, line and sinker.”

Wallace took an even stronger stance on the issue.

“Creationism to me is factual,” he said. “Darwinism is a theory.”

As for court rulings against teaching creationism in science classes, Wallace said people must work within the law or change it.

Lake Zurich is headed for disaster. 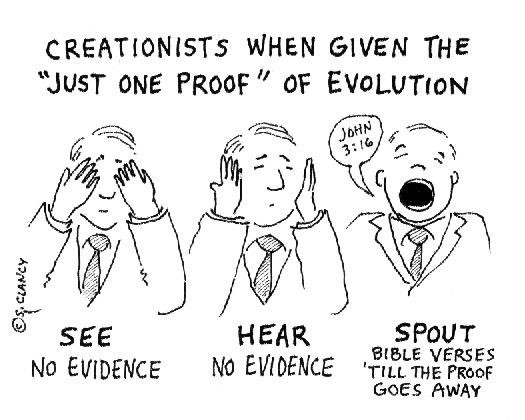 No matter what happens in the election, there will be school board members — in the majority — who want to redefine science based on their faith. They don’t care what these kids learn — their selfishness and religiosity is going to prevent these children from having the proper science background necessary to succeed in college.

Maybe there’s some solace in the fact that all three current board members are Creationists but haven’t tried to change the curriculum yet… but I doubt that will last for much longer.

Even if the courts prevent them from introducing Creationism into the curriculum, the district could face a legal battle. And they would likely lose the case, but not before enough damage has been done.

February 26, 2011
He Still Should Have Fought the Female Wrestler
Next Post