The last time former Massachusetts governor Mitt Romney ran for President, about one-third of evangelical voters said they were less likely to vote for a candidate who is Mormon. How much do you think evangelicals should consider candidates’ faith when deciding whether to vote for them?

And here’s how Huckabee began his response:

I don’t think they should, unless that person advances something truly bizarre…

Says the guy who believes abortion is never ok even in cases of rape or incest, the death penalty, Creationism, prayer, Heaven, and Jesus… 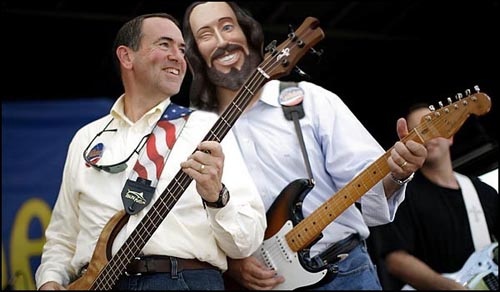 And he’s thinking about running for President?!

We sure as hell should question his beliefs. There’s no religious test for public office, but we deserve to have a president who has a solid basis in reality.

February 23, 2011 Member of Atheists of Florida Arrested for Disrupting School Board’s Prayer
Browse Our Archives
What Are Your Thoughts?leave a comment