He Should Have Fought the Female Wrestler February 21, 2011 Guest Contributor

He Should Have Fought the Female Wrestler

There’s a story making the rounds about a Christian high school wrestler who forfeited his chance to win a state title because he would’ve had to fight a female wrestler along the way:

But in a brief statement issued through his school, Northrup said he defaulted on his match with Herkelman because he doesn’t think boys and girls should compete in the sport.

“I have a tremendous amount of respect for Cassy and Megan and their accomplishments.

However, wrestling is a combat sport and it can get violent at times,” said Northrup. “As a matter of conscience and my faith I do not believe that it is appropriate for a boy to engage a girl in this manner. It is unfortunate that I have been placed in a situation not seen in most other high school sports in Iowa.”

Herkelman’s family has had nothing but nice things to say about Northrup:

Her father, Bill Herkelman, told The Associated Press via text message that he understands and respects Northrup’s decision.

“It’s nice to get the first win and have her be on the way to the medal round,” Bill Herkelman wrote. “I sincerely respect the decision of the Northrup family especially since it was made on the biggest stage in wrestling. I have heard nothing but good things about the Northrup family and hope Joel does very well the remainder of the tourney.” 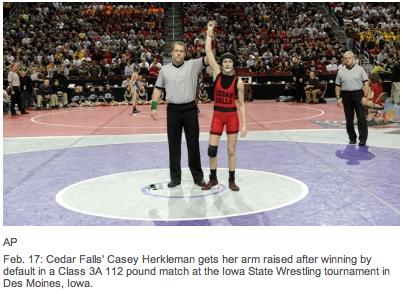 Herkelman ended up losing her next round match, but that’s besides the point.

I’ve read a number of stories about this match and they all make it out to be a beautiful example of tolerance and grace.

That needs to stop. It’s neither and we need to stop acting like everything worked out perfectly.

Jay, a wrestling coach, emailed me to explain why we shouldn’t be applauding how this all turned out:

Everyone seems to be ok with this but I think it undermines the hard work that this girl put into getting as far as she did. The male wrestler commented that because the sport was combatitive he didn’t want to wrestle out of a matter of conscience and faith. I’m a wrestling coach and I had a girl on my team. She worked her tail off every single day and handled practice better than some of the guys. To “give” the championship to this Iowa wrester in this way is to say “God doesn’t deem you worthy of competing against me.”

Northrup deprived us all the opportunity to see a strong, hard-working girl kick his ass on the wrestling mat. Instead, he used God as an excuse to get out of a potentially embarrassing match.

Based on his record, though, he probably would’ve won the match. If he did, all this would’ve been a non-issue — She was the underdog, not him. She had more to prove, but he denied her that opportunity.

He doesn’t deserve any special respect for that.

Side note: Why would everything have been ok if Northrup wrestled a guy and been in similar compromising positions? If anything, that seems like it would be more against his “Christian values” than anything else… I *so* don’t understand wrestling.)