Why Asking Why Isn’t Enough

The question “Why?” is an impressively vague word. Used without context, it can be almost useless. I got contacted by the makers of the documentary “The Nature of Existence” whose trailer starts with the filmmaker saying “We all have one thing in common: We exist. But why?” What a nebulous question. It’s met by a stream of responses on completely different topics. When it comes to provoking thought, it’s fine. If you actually want particular information… it’s terrible. (That said, if I can get over my frustration at the ambiguity they’re reveling in, it looks like the film has potential.) 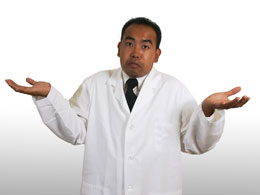 You need to apply some context to the question of “Why?” before it’s even possible to think about as a question. It’s just a request for more information, some information, any information somehow related! “Why do we exist?” is a pretty vague question, so they got a huge range of responses. Let’s take one with a bit more context. When my mom used to ask me “Jesse, why are your dishes still on the living room floor?” sometimes I would answer “Because they lack the capacity to move for themselves.” (Yes, I was an annoying smart-ass. I like to think I’ve gotten over it. Mostly.) I could have also answered “Because gravity is exerting a downward force on them.” From the context of our previous conversations, however, I think the information she REALLY wanted was “Because I forgot about them when I went upstairs. Sorry.”

But even when you know the context, “Why?” can be a frustrating question. Once you have the desired information, that information can be examined. There’s an excellent video of Richard Feynman explaining how tough it is to answer ‘why’ questions like “why do magnets repel?” I think I’ve posted that before, and my sister Julia Galef found a hilarious clip that makes the point. Enter Louis C.K. trying to answer his daughter’s questions (Language slightly NSFW – what did you expect; it’s Louis C.K.!)

You *can’t* answer a kid’s question! They don’t accept any answer. A kid never goes ‘oh, thanks, I get it.’ They fucking never say that! They just keep coming, more questions: why, why, why, until you don’t even know who they fuck you are any more at the end of the conversation! It’s an insane deconstruction!

I just about lost it when he got to the point of saying in exasperation “Because the things that are NOT can’t BE!”

We can push back every explanatory question further, asking “why?” to every answer until we either ignore the problem or call it “God!” and enjoy the feeling of mystery (what Eliezer Yudkowski referred to as the Explain/Worship/Ignore decision.)

To me, the question isn’t “What makes kids keep asking ‘why’?” but “What makes the rest of us accept answers?” I think it’s because we’re asking with a sense of what information will give us the ability to change the situation. If I ask why my friend is late, I accept hearing that he got a flat tire. I have some understanding/experience of flat tires – what causes them to go flat, how they can be prevented, and what to do after they happen. I can take action or made new decisions now. But the poor 2-year old doesn’t have experience of tires. She doesn’t know what information will be useful, she just wants more information. She’ll keep asking “Why did the tire go flat?” and then “Why do potholes cause flat tires?” or perhaps “Why does that make him late?” With no previous experiences or understanding about how these concepts affect the world, answers don’t satisfy the urge to gain a handle on the situation.

Of course, there’s another group who refuses to stop broadening their understanding: scientists. Their job and passion is to further our understanding and figure out new ways to make it useful. They’re like two-year olds, constantly looking for new ways to make sense of the universe. But where toddlers are trying to catch up, scientists are leading us to new places.

Bonus P.S. – SMBC had a perfect comic on this topic I wanted to include, but it was pretty long. Check it out!

February 19, 2011
Everything You Need to Know About the Major Religions
Next Post

February 19, 2011 ‘Repent Amarillo’ Leader Is Running for Mayor
Browse Our Archives
What Are Your Thoughts?leave a comment