I know I’m late to the party here. There’s been plenty written already about how Apple rejected an iPhone/iPad app called The Manhattan Declaration — the declaration calls on conservative Christians to be strongly anti-choice, against equal rights & marriage for gay people, and supportive of things like “conscience clauses” so that Christian pharmacists can deny you birth control as they please.

The app in question:

The survey consisted of four questions — including “Do you believe in protecting life from the moment of conception? Y or N” and “Do you support same-sex relationships? Y or N” — and 25 points were awarded for each “correct” answer.

A pro-abortion or pro-gay marriage response was considered incorrect. 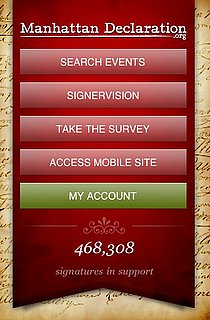 Frankly, it sounds (and looks) like a really boring application. Even if a similar app was put out which expressed my own views, I wouldn’t waste my time downloading it.

However, after petitioners called it out for being anti-gay and anti-woman, Apple removed the app from their store saying “it violates our developer guidelines by being offensive to large groups of people.”

At this moment, the app is still unavailable.

I know the Apple store accepts and rejects apps as they see fit and there’s a lot of discussion over what the guidelines are (or should be). It’s not clear cut, in any case.

But should an app be pulled because some people find it offensive?

Even with the survey removed, this is just a statement of conservative Christian beliefs. There are plenty of other apps available that are favorable to Christians — the number of Bible apps alone is staggering — so why is this one singled out?

Reader Jenea reluctantly raises this point in an email:

I find myself in the uncomfortable position of having to condemn the actions of organizations I support, such as Change.org and GLAAD, and stand in solidarity and support for something I abhor, namely the Manhattan Declaration.

The long and short of it is that these organizations pushed for censorship, and got it. There is something especially disturbing about allowing a corporation to be the arbiter of what is or is not acceptable speech.

On Friendly Atheist you talk often about how important it is to support free speech, even if we don’t like it, and you call out Christian groups for not standing up for atheists who want to exercise their right to free speech.

Is this a good opportunity for atheists to stand up for the rights of Christians to exercise their rights?

I don’t see any reason for the app to be rejected. Apple should reinstate it.

Let’s mock the declaration all we want. Let’s all give it a 1-star rating. Let’s use it as evidence that Christianity is an inherently bigoted faith — if followed the way the Declaration commands — and make other Christians have to defend shit like this.

But let’s not support the censorship of their beliefs, even if they are completely abhorrent.