LifeWay Christian Stores has decided to get rid of its ridiculous “Read with Discernment” program, in which certain books were marked with stickers encouraging people to “read cautiously.”

I posted about this program a couple years ago. Since most of it is still relevant, I wanted to repost it here (with a couple edits to fix links).

To nobody’s surprise, LifeWay Christian Stores sells Christian books among their many products. As any reader of these books knows, however, the authors can range anywhere from super-fundamentalist to relatively-liberal.

To help their customers out, LifeWay now puts a label on certain books stating “Read With Discernment”:

While we recognize that almost every title requires some measure of discernment, certain titles should clearly be read with extra discernment.

We want you to know that the authors of books marked Read with Discernment may have espoused thoughts, ideas, or concepts that could be considered inconsistent with historical evangelical theology.

(That saying is trademarked, too, so don’t get any ideas.)

The books that are on the “discernment” list include books by authors such as Rob Bell and Donald Miller — both authors who, from my readings of their books, seem to be Bible-believing Christians… but who also don’t think being gay is that big of a deal and who think Christians ought to give a damn about the poor. 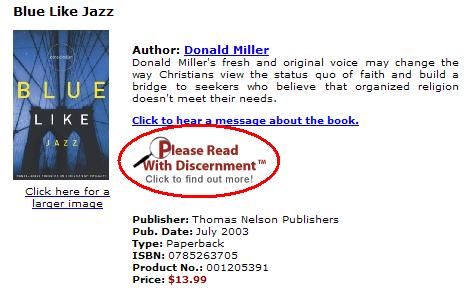 Which book doesn’t have the discernment label?

The Bible? (They don’t even put the atheist warning label on it.)

… I’m disturbed by the unspoken implication that the other books sold at their website don’t need as much discernment while reading. Apparently, if something agrees with historical evangelical theology then it gets a pass on reading with a critical eye. We only need to be discerning about those that are discerning about historical evangelical theology since such opinions are only valuable to those those who engage them “strictly for critical study and research.”…

The irony is that [LifeWay] will take your money while they sell you — what they consider to be — theological trash.

Not that there are really any atheist bookstores, but if there were, can you imagine them *ever* pulling any shenanigans like this?

I don’t. We have nothing to be afraid of. We enjoy the fact that some books may challenge our current ways of thinking. We think all books should be read with discernment.

I wonder: What are LifeWay’s customers so afraid of finding in those read-with-caution books? What will happen to them if they read those books without reading the warning first?

I also wonder: Can my book get one of those labels? Pretty please…? I want to be on the blacklist! Read me with discernment, dammit!