Stuck in Your Head: Communicating Badly

If I’ve learned anything from blogging, it’s that I’m not writing for myself. Maybe other people treat their blogs as diaries, but I see blogging as a way to communicate my ideas to others. No surprise there; it’s what I do. I’m a communications director at heart, not just for a job. When I see crappy communication causing confusion or controversy, I feel compelled to counter it. (Ok, that alliteration WAS for me.) 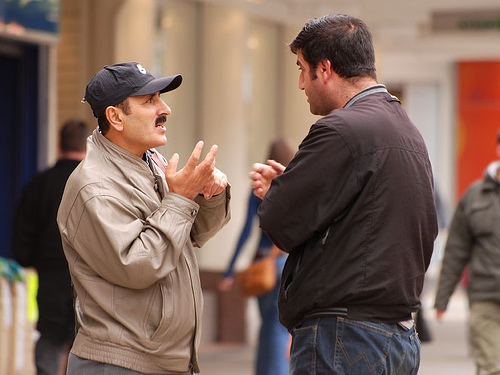 Case in point: a poorly-received joke at the awesome and inspiring Southeast Regional Atheist Meetup resulted in a women running from the room in tears. I was at the event but missed that part, so I’m piecing the story together. During a heated discussion about how to make women feel more comfortable at atheist events, a visibly frustrated woman asked why the panel kept using the word ‘females’, since that made her feel like they were discussing livestock instead of people. Someone on the panel joked “What do you want us to say, ‘the weaker sex?'”

I’m pretty sure the panelist intended it to be funny. But the result was that the woman – who already felt marginalized and dismissed – got fed up and left crying. Probably not the result he intended. That’s the question we need to ask ourselves: What do we want to accomplish with what we’re saying?

A trick I’ve found to communicating well is to get out of your head. It’s tempting argue the way you find persuasive, make references you understand, and tell jokes you find funny. That’s great – if you’re talking to people like yourself. Communicating isn’t simply a matter of expressing a thought. It’s about having other people understand the message the way you want. And that requires us to take into account who we’re talking to and how they’re likely to take different statements. The “I’ll say what I think, damn the consequences!” attitude has never made much sense to me.

Before I’m accused of being an accomodationist – whatever that word means these days – I’m NOT saying we have to change the substance of our message to pander to people. Sometimes the desired goal IS to have others see us disrespecting their “sacred” cows. But there’s a difference between the substance of a point and the way to make it understood. It’s only rational to adjust our tactic to our audience – or audiences. Once we choose the substance of our message, we should figure out how to make people hear it. In a nutshell: make sure you’re being effective.

If your goal is to make the other person see your point of view as admirable, figure out why they would admire it. Sean Faircloth of the Secular Coalition makes a special effort in his speeches to connect to the “soccer moms and Joe six-packs” by giving powerful anecdotes, sometimes tying lobbying goals to the health of children. If your goal is to make the other person reexamine the special privilege we give religion, a good strategy might be to shock them a little by drawing a smiling stick figure of Muhammad. If your goal is to show a woman that you value her presence, a joke at her expense might not be so effective.

It sounds obvious when phrased like that: “be effective”. But I think the inclination to stay in our heads makes it tough. Gauging how another person will interpret a statement takes concentration, perception, and some guesswork. If you’re around people who are just like you, then it works to substitute your own sensibilities. I think that’s why I find it so much more of an effort to interact with strangers – I’m constantly trying to figure out how they’ll take my jokes, my quirks, my way of speaking. With friends, I can relax and go with my gut.

The need to get out of our head is particularly telling with word definitions. (I share this pet peeve with PZ, although I think we resolve it differently). Just because I have a particular word-meaning connection doesn’t mean that everyone else has it.  Words are a human invention and gain meaning through shared convention, not divine edict or dictionary authority.  How many times have we run into people who argue that the word ‘religion’ means “a system of morals” or “a community with rituals” or “a belief relating to a creator”? If they don’t have the same word-meaning connection, there’s a good chance they’ll be confused when they think you’re saying “I reject all systems of morals!” Sure, you wanted them to understand that you reject beliefs about supernatural creators – but it didn’t come across that way.

There are misunderstandings over the word ‘atheist’. ‘Agnostic’. ‘Faith’. ‘Spiritual’. ‘Theory’ (ugh, look at all the trouble that causes). ‘Evolution’. ‘Morality’. And on and on. There are reasons to fight about word definitions. But that argument – and any meaningful communication – can’t be effective unless you remember that others might not be using the words exactly like you are. Figure out how it comes across to them and adjust.