When the Green Bay Packers’ Nick Collins intercepted the ball and scored a (pretty exciting) touchdown, he got on his knees, threw his hands in the air, and got penalized for it.

It was “excessive celebration.” Specifically, the refs said Collins “[went] to the ground after the score.” 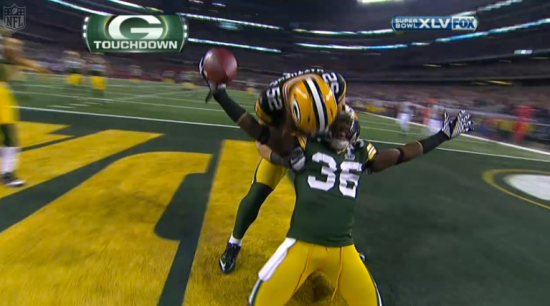 Now, cut to later in the game. The Packers’ Greg Jennings caught a touchdown pass and also went to the ground after the score. The only difference is that he was (clearly) saying a prayer. 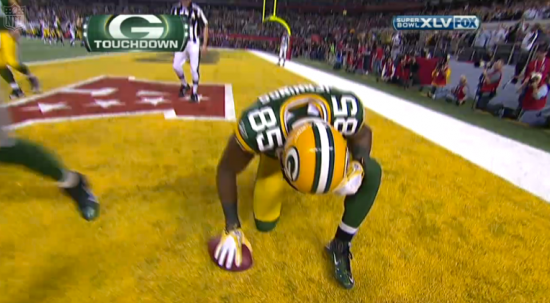 No penalty was called. Maybe that’s a good thing — can you imagine the headlines if Jennings was penalized for praying? The Christina Aguilera National Anthem flub would be irrelevant compared to that.

Slate’s Tom Scocca isn’t sure what the rule is regarding “excessive celebration”:

When I wrote about this issue a couple years ago, the National Football League’s Vice President of Officiating, Mike Pereira, had this to say:

The whole issue is, you can’t go to the ground on your knees or with your hand or anything. There’s only one time that you’re going to be allowed to go on your knee after you score like this, and that’s when you want to praise the Lord. If you do that, then I’m going to allow that, because I do not want to be struck by lightning, I promise you that. We will allow that.

The NFL is a private organization, of course. They can issue (or not issue) fines however they would like. But some consistency in the rules would be nice. If they want to allow Christian prayers after a touchdown, why not just come out and say it?