A couple weeks ago, I mentioned that the Agnostic and Atheist Student Group at Texas A&M was conducting a fundraiser called Donations Against Damnations. The goal was to raise money for the groups that notorious campus preachers like Brother Jed speak out against. 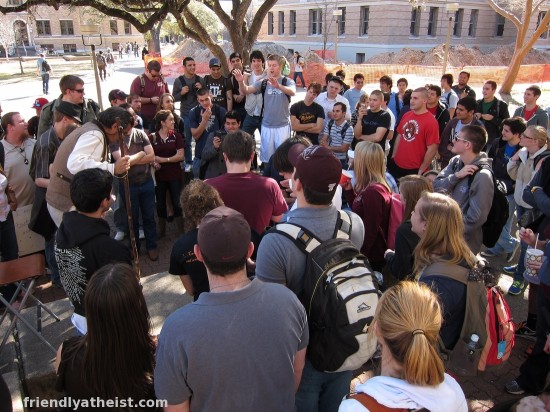 (Jed’s the guy with the cane in the picture above.)

Keri Bean of the AAS tells me the fundraiser was a huge success — they raised $600 total, $150 for each of four groups.

So what happened on the days of the fundraiser? Keri tells the story:

Once [Jed] showed up, we went and held signs by him. On this day his particular focus was on women and their “place” in society, and he flat out said women are only meant to be kept in the bedroom and the kitchen. He also gave a few, um, graphic descriptions of how babies are made. He also said he respects prostitutes more than girls who sleep around because at least they put a price on their body! Lots of girls were quite frustrated as the day progressed, as you can probably imagine. He also attacked homosexuality, so some of the gay kids made out in front of him in response, freaking out Jed quite a bit. 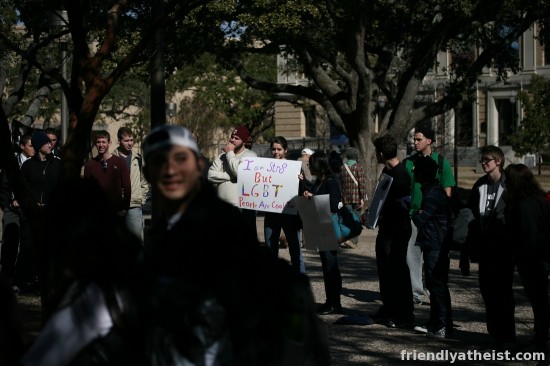 Despite the rampant homophobia exhibited by Jed, there were a few positive things to note:

Keri mentioned that she had a chance to speak with Jed’s daughter Martha (“and she actually is a lot nicer and saner than her dad”).

At one point, Jed agreed to sing “The Gay Song” alongside a drag queen. You have to watch it. Though it’s a bit unsettling to see him make hand gestures for the words “homo” and “lesbo.” You’ve been warned:

Keri also told me that there was quite a bit of unity between different religious groups in response to Jed:

The Unitarian church, including the minister, came on Thursday and held signs for a few hours. Also on Thursday we were joined by some nice ladies from the Friends church who brought mini heart-shaped cakes to “fill us with love!” One of the ladies also handed Jed one one of the cakes and said “Jesus loves you too” and she was quite upset that he didn’t even say thank you.

We also had several students from the Aggie Lutherans join us, and even the Mormon missionaries came out and supported us. I jokingly say now that when the Mormons and the atheists are agreeing on religious issues, the other guy has serious issues!

We also had several Christians, not necessarily affiliated with any group, come and stand with us and hold signs or give money. There were also a few guys from the Jewish fraternity who joined us too. 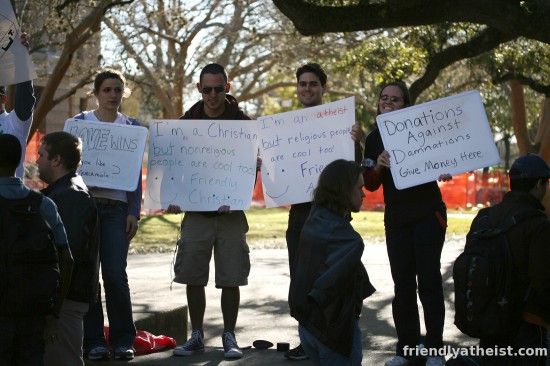 All in all, it’s great to see students from various religious backgrounds come together to dismiss an agent of intolerance — though I wonder how many religious people would have shown up if the anti-gay bigot at the center of attention was someone more “respectable” like Rick Warren.

I love it when atheists lead the charge against intolerance using their intelligence and wit, and even raising money for good causes in the process, even if the school newspaper doesn’t seem to get that.

By the way, you can read Jed’s takes on the TAMU response here, here, and here.

Finally, one filmmaker, Robert Jacobson, was on hand to make a documentary about Brother Jed and released this trailer using the footage from his TAMU appearance: