‘Smut for Smut’ Campaign is Back February 2, 2011 Guest Contributor

‘Smut for Smut’ Campaign is Back

It was less than a year ago when I lamented that the Smut for Smut campaign run by the Atheist Agenda group at the University of Texas at San Antonio was a bad idea:

… I get the point. The Bible has smut and violence and that needs to be pointed out. It’s not all rainbows, flowers, and Jesus.

One of the group’s officers issued a rebuttal to that posting the next day.

The turnout of people from our Smut for Smut campaign only proves it’s working. Never have we had a response from the student body like this before. While it may seem like a lot of negative flack, sitting at the table I have talked to TONS of open minded people who are willing to listen if I’m ready to listen. And I’ve had EXTREMELY intelligent conversations with some. Now of course you get those people that first start off like they’re gonna be intelligent about it and then end up bible thumping you in the face. But it’s through Smut for Smut that we have had the opportunity to have our voices HEARD.

I say to those against the campaign, you try finding a way to get HUNDREDS, possibly THOUSANDS of students to be willing to actually DISCUSS with you, in a way that isn’t going to offend someone.

This year, Atheist Agenda is running the same campaign and, once again, the media is covering it: 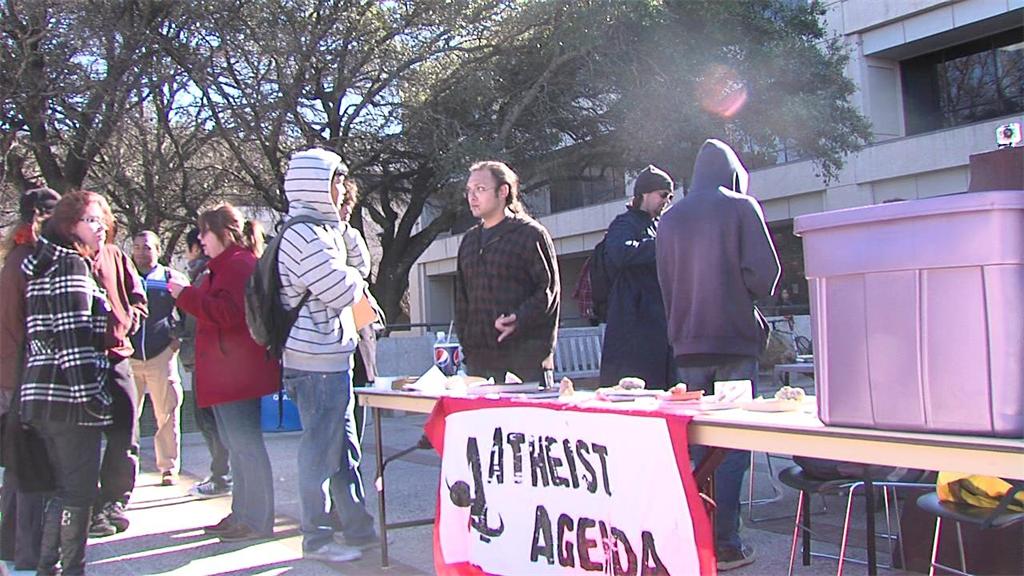 “It is to send a message that the stuff in the bible, and the Quran, and the Torah, and all that sort of thing is, in our case worse, in our opinion worse, than pornography,” explained UTSA student Kyle Bush.

This is the second year in a row for the event. Christian students were also out talking to fellow students about their beliefs. It’s not known how many students actually turned in their bibles for the pornographic material.

For some reason, this time around, this event doesn’t strike me as all that provocative.

Maybe it’s because I’ve seen more “controversial” statements on atheist billboards. Or maybe it’s because the reasons for supporting it a lot of you gave in the past has finally sunk in. I’m just not in opposition to this event as much as I used to be.

I still don’t think it’s the type of campaign I would’ve run if I were still leading a college atheist group. I think it invites a lot of negative publicity — and not in the any-coverage-is-good-coverage sort of way.

One reason I liked the “You KNOW it’s a myth” billboard was that it was aimed at atheists who are in the closet. It encouraged them to come out.

Out atheists? They probably know about the group’s existence already.

In-the-closet atheists? Why would they be drawn to a group like this…?

Christians? They’d probably just get offended and avoid conversation… or have a conversation for the sake of conversion.

If the goal is simply to get attention, I guess the group wins. But what have they sacrificed in return?

February 2, 2011
Atheism Is Spreading to High Schools
Next Post

February 3, 2011 Donations Against Damnations Recap
Browse Our Archives
What Are Your Thoughts?leave a comment