Wycliffe Bible Translators has translated the Bible into one hell of a lot of languages (with plans for many more): 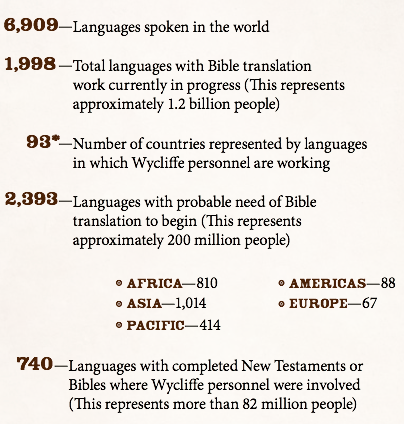 It prompted reader Brian to ask (via email) whether we can do something similar for books about science:

… Wouldn’t it be great if there was an initiative like this one, only instead of the Bible, it worked to translate science textbooks and casual science books (i.e. Universe in a Nutshell, Galileo’s Finger, etc.) into all known languages, so that someday the entirety of the globe will have access to the words of Feynman, Sagan, and others?

Even if such an initiative were to closely parallel Wycliffe, all it might take are some basic teachings of math, physics, biology, and geology combined with some casual text explaining scientific evolution and scientific marvels to get a book or body of work as big as the New Testament or even the Bible, which could then be translated into hundreds (if not thousands) of languages.

I feel like most (if not all) developed countries have (or should have) a basic science/math/logic curriculum, so I don’t know if I’m overreacting because Hawking’s book exists in only 20 or so languages while The Little Prince exists in 190 (and the Qur’an in 112). Maybe spreading these words isn’t immediately necessary. But then there’s the spreading of science texts to less developed or “indigenous” peoples, in the same manner that the Bible has been spread.

Are people everywhere ready for The Pale Blue Dot? And if science is too much, then what about the spreading of non-Bible religious or philosophical texts?

Wycliffe says they only translated the Bible for a community or people when the “spiritual” need is recognized by the Translators and/or the native individuals. Why answer such a need with only the Bible? Why not also the Tao Te Ching or Meditations on First Philosophy or An Enquiry Concerning the Principles of Morals?

It’s an interesting idea and I don’t know if it’s been actively pursued before.

If a group of people don’t have access to books in their native language, giving them something educational seems much more worthwhile to me than giving them false hope steeped in mythology.

Any thoughts on whether something like this should happen at all and, if so, how to go about making it happen?