A month ago, the Atheists of Florida were threatened by the Cape Coral City Council because they were wearing shirts that read, “One Nation, Indivisible”: 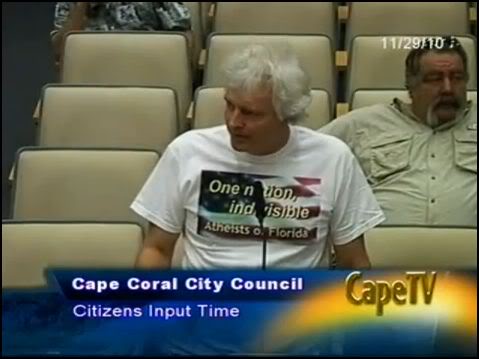 This is what happened last time:

During the mid-meeting break, Cape Coral Mayor, John Sullivan, and city manager, Gary King, reiterated their demands for members to replace or cover up the shirts. King indicated that the shirts were in violation of council policy. He further warned that if the shirts were still visible, anyone wearing the attire would be asked to leave and if necessary, Cape Coral police would be employed to enforce the demand. [AoF president John] Kieffer asked to see the policy and was told that this could not be done at the time. Kieffer responded that he would refuse to comply and would accept the consequences. A few minutes later, King informed Kieffer that he believed that the shirts “should be okay.”

On Monday night, the city council followed through with their threat when AoF President John Kieffer got up to speak. Mayor John Sullivan kicked him out because of his “improper attire.” Soon after, the council voted to let the atheists speak (or, really, to avoid any potential lawsuits).

And it’s all on video:

The mayor’s also upset because the atheists shouted “Indivisible” during the Pledge of Allegiance when they were expected to say “under god.”

Jen Hancock at the Examiner writes:

The Cape Coral City Council and the mayor have yet to clarify their apparently nonexistent dress code policy and the mayor seems to think he has the right to arbitrarily decide who can address the council and who can’t. Some members of the council also apparently think that they have the right to force Atheists to invoke God in the pledge despite the fact that the First Amendment of the US Constitution prohibits the government from coercing people into participating in a religious practice they don’t agree with.

The atheists aren’t asking the council to promote godlessness. They’re asking for the meetings to be kept secular. There’s no need to invoke god’s name in the Pledge — or say it at all. Ditto with any invocation prayers.

It’s an easy fix, and it just so happens to be the Constitutional thing to do. This controversy wouldn’t exist if the council simply focused on city issues instead of on promoting faith in any way.

(Thanks to Kim for the link!)

January 25, 2011
An Interview with a Former Quiverfull Parent
Next Post

January 26, 2011 He Boiled for Your Sins
Browse Our Archives
What Are Your Thoughts?leave a comment