The Agnostic and Atheist Student Group of Texas A&M heard that Brother Jed, the notorious campus preacher, was visiting them next week.

Kari Bean and the members of AASG have decided to do some fundraising of their own. Specifically, they plan to raise money for the very groups Jed opposes — the ones that are friendly to gays, women, and atheists. 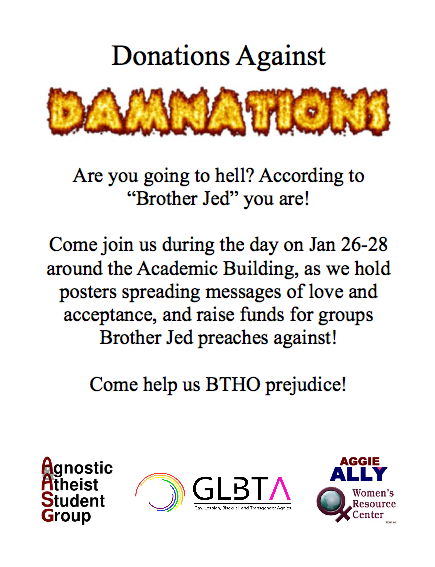 Keri writes in an email:

Right now we have over 10 different campus groups participating, ranging from the GLBT groups to some Christian groups… We have at least 2 ministers who are participating too.

That’s how you make the best of a sad situation. While Jed is spouting hate, the atheists (with other groups) will be showing love and raising money for good causes.

I can’t wait to see the pics and video 🙂