Dan Barker, the co-president of the Freedom From Religion Foundation and author of Godless: How an Evangelical Preacher Became One of America’s Leading Atheists, is one of the few notable atheists who actually lived his life under the spell of religion. He knows first-hand what it’s like to come out as an atheist and lose people you thought were friends in the process, and he spends a lot of time traveling around the country, telling his story.

Now, get ready for the release of his newest book: The Good Atheist: Living a Purpose-Filled Life Without God: 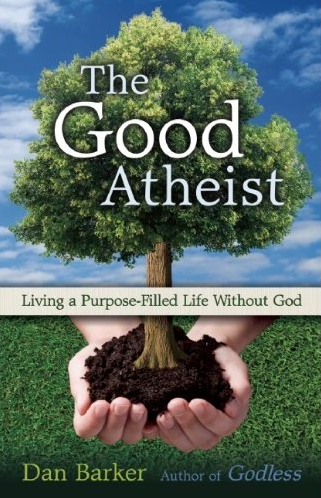 The title is self-explanatory, but the description is very promising:

Christians often claim that people who do not believe in God are unable to find true fulfillment and live a purpose-driven life. In The Good Atheist, author Dan Barker constructs a simple moral argument for finding happiness through altruistic living — without calling upon the notion of God’s reward or punishment. Barker outlines an easy-to-follow plan for making these principles part of one’s everyday life. Profiles of many notable atheists serve to emphasize these points and provide inspiring examples of freethinkers who have made the world a better place.

To those who criticize recent books by atheists as too focused on tearing down religion while offering nothing in its place, this is a book that finally addresses the positive aspects to living without a god.

To those “aggressive” atheists who thought Greg Epstein‘s book Good Without God was a little too “spiritual” and treated religion with kid gloves, this is a book that will no doubt hold nothing back against faith. Dan Barker is one of the most outspoken critics of religion out there.

And, of course, you have to love the not-so-subtle subtitle jab at Rick Warren, who thinks you need a god in your life for it to be “purpose driven.” Dan’s a seasoned debater, he’s constantly in demand by college atheist groups, and he’s a thorn in the side of the entire Religious Right thanks to FFRF’s stack of successful lawsuits. He’s as good a spokesperson for atheism as we’ve got.

I’m so excited about the publicity push for this book 🙂