Andrew Wakefield’s Autism/Vaccines Study Shown to Be a Hoax

This is a guest post by Jamie Bernstein. Jamie is a graduate student in public policy at the University of Chicago.

For those who have been reading this blog for awhile, you might remember a guest post I wrote back in May where I talked about meeting Andrew Wakefield, getting my picture with him, then handing him a note with my true feelings for him to read later.

If you’re still not really sure who Andrew Wakefield is, here’s a CliffsNotes version:

1998: Wakefield releases a paper in the British journal The Lancet linking the MMR vaccine to autism in children.

1998 – 2004: Wakefield’s results are not replicable and all other medical research is unable to find any link between autism and vaccines.

2010: It is determined that Wakefield did not report conflicts of interest in his initial 1998 study and, furthermore, he acted unethically in regards to the children in the study. The Lancet formally retracts the 1998 paper and he loses his UK medical license, though he continues to practice medicine in the US.

Then, when things seemed like they couldn’t get any worse for Wakefield, last night an investigation by Brian Deer published in the British Medical Journal (BMJ) provided proof that Wakefield’s original study was a deliberate and elaborate medical fraud.

This is pretty much the nail in the coffin on this case.

There is a grand total of no evidence whatsoever linking autism to vaccines — even the slight piece of evidence that at one point seemed to have something to it turned out to be completely falsified.

Well, that’s it then! It’s great news and a great win for science! The anti-vaxers are sure to review the available evidence, realize they were wrong, and retract all their previous anti-vax sentiments. I’m sure we’ll see Jenny McCarthy on the next episode of Oprah admitting she was wrong and telling everyone to get vaccinated!

Oh, wait. That wasn’t how things worked out after all.

In fact, it took the anti-vaxers at Age of Autism all of 2 seconds to post a response on their website, blaming the report on an elaborate conspiracy orchestrated by Brian Deer.

This is just one more example of what makes pseudoscience decidedly not science. In real science, a person looks at all the available evidence and goes where the preponderance of evidence lies. In real science, had many other studies come out confirming Wakefield’s linkage of autism and vaccines, then scientists would have eventually been swayed to his side.

Only in the realm of pseudoscience do supporters hang on to their ideas long after the evidence has shown it to be completely wrong.

And now, for your viewing pleasure, feast your eyes on this video of Anderson Cooper calling Wakefield a liar to his face!

Also, even though this has nothing to do with Wakefield, I’m going to use this opportunity to brag about the fact that I once partied with Anderson Cooper and I have a picture to prove it! 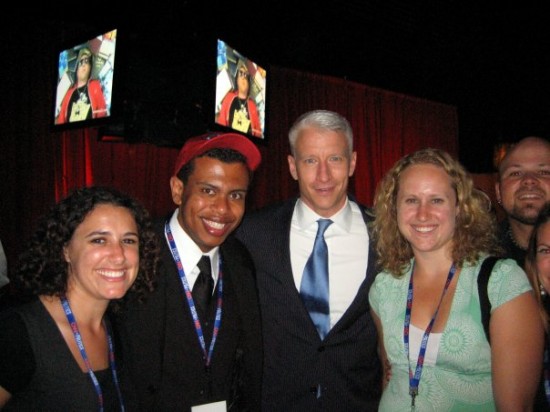 He looks even hotter in real life! (That’s me on the left, by the way.)

All joking, Wakefield bashing, and drooling over Anderson Cooper aside, the release of Deer’s investigation and the proof of the fraudulence of the original 1998 Wakefield study is a huge win for science. But it also has a dark underside.

We know Wakefield’s study is a hoax now, but it was taken seriously when it first came out, despite the lack of corroborating studies. Wakefield’s study set off a vaccine scare that has persisted to this day, causing a decrease in childhood vaccination rates and an increase in instances of preventable diseases.

This isn’t an isolated incident, either. Preventable disease outbreaks happen pretty much every year in the US. Just take a look at Derek Bartholomaus’ Jenny McCarthy Body Count website if you don’t believe me.

Almost equally as bad, in the years following the publishing of Wakefield’s study, a lot of genuine scientific research toward finding the causes of autism was diverted into studying the false autism/vaccine link, greatly setting back autism research. So, Andrew Wakefield’s lies have not only led to deaths from preventable diseases, but also has likely held back a deeper understanding and possibly even the discovery of treatments for children with autism.

If there’s one thing we’ve learned from this whole debacle, it’s that science works, but it can also be led off-track, at least for a short period, by those who wish to twist and pervert it toward their own ends.

The fight against the anti-vaxers is not over yet and it won’t be for a long time, but hopefully this recent incident and its excellent coverage in the mainstream media will set them back a bit. At least for today, science has gotten itself a well-deserved victory!

January 5, 2011
The Religious Makeup of the 112th Congress
Next Post