Hank Fox is an atheist from upstate New York and he’s just put out a book of his thoughts regarding religion called Red Neck, Blue Collar, Atheist: Simple Thoughts About Reason, Gods and Faith. 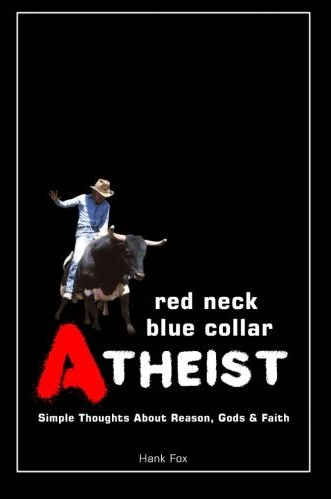 This book is far more emotional than the other atheist books you may have read — it focuses on the transformation that takes place when you become an atheist (and leading up to it), instead of all the reasons why someone should become an atheist.

A couple excerpts from the book are below (I really like the second one):

Getting religion out of my head was a beautiful, intense emancipation. The sheer awesome clarity that came to me after that, the peace that descended on me, is not something I could easily describe.

It wasn’t the peace of supposedly knowing some holy book was the ultimate answer, if I only gave up enough of my questioning mind to accept every word of it.

It wasn’t the elusive peace of believing I’d done every ritual and abasement correctly, that I had scraped and bowed and sacrificed enough that some god would mercifully refrain from killing my loved ones and might even let me into eternal paradise.

It was the peace of understanding that, while there might be quite a lot of the world unknown to me, there was nothing purposely concealed. There was nothing “man was not meant to know.” The whole of the universe was this honest, trick-free place that I myself could come to understand, with the only limits being my limits — of intelligence or energy — and not those imposed by the hallucinatory scribblings of Bronze Age shepherds.

I discovered that there were no all-wise holy men who talked to powerful but secretive gods in ways that were denied to me. There was no magic ritual I needed to perform each day in order to avoid burning in fire.

There was no mystical superbeing looking down in prissy, embarrassed fury every time I got an erection. No mean-spirited creator of the universe taking down my name in purse-lipped concentration each time I wanted to crack open a science book. No small-minded, vengeful holy telepath glaring into my mind and angrily noting my every traitorous, blasphemous, independent thought.

There was no threat built into the universe, no lightning-wreathed fist waiting to smash me for making the slightest misstep.

From Ch. 19: The Doorway to Freedom

I distinctly remember being disturbed, at the age of 7 or so and beginning to be an avid reader, when I came across the words “fiction” and “non-fiction.”

The real thing — which was everything, every subject, the power of all the knowledge in the whole world — was named only as a negative of this comparatively tiny category of entertaining-but-fake stuff that was just made up in somebody’s head.

I feel the same way about the words “atheist” and “atheism.” It’s as if the believers — theists — are the only ones deserving of formal recognition, and the rest of us are mere also-rans.

Hank’s offered to give away a copy of the book to one of you!

All you have to do is tell us how you felt the moment you became an atheist… in five words or fewer.

Be enlightening. Be entertaining. Be honest.

I’ll contact a random winner next week. You must be in the U.S. and you must put the word “silver” at the end of your comment if you want to be considered for a prize.