An Excerpt from Moral Combat: Black Atheists, Gender Politics, and the Values Wars

Despite all the press we’ve seen in the past few years, the number of atheist books on the market is still pretty small.

It’s even rarer to see a book about atheism from a female perspective.

It’s even rarer still to see a book about atheism from a black female perspective. Ayaan Hirsi Ali is the only person who comes to mind. But I’m happy to say there’s now someone else contributing to the literature. 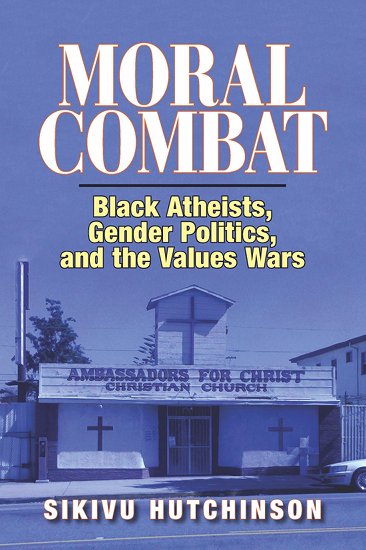 An exclusive excerpt from her book is below:

The counting starts as soon as my friend and I step foot in the convention hall. One, two, three, a negligible four, hovering tentatively at a vendor table, darting past with averted eyes. We can tick off the number of people of color at the 2009 [Atheist Alliance International] convention in Burbank, California on one hand. We savor the old familiar counting game ruefully, sardonically. Having both attended predominantly white universities and sat on nearly all white boards we’ve become experts in the anthropology of white settings. The laser-like stares that people of color elicit from curious whites in protected communities. The feeling of black hyper-visibility and invisibility. The specter of white folks’ oblivion to the history and power of white crowds. The creeping sense of being transported back in time, to a galaxy not far away. Though a few minutes away from downtown Los Angeles’ ethnic polyglot, Burbank is a largely white professional enclave dominated by TV studios, industrial parks, hotels, strip malls, awkwardly configured streets, and an airport. Like similar cities in L.A. it has a robust history of racial profiling and segregated schools. So, coming in to the convention we know the drill. But the thriving online community of atheists of color has led us to have higher expectations for some “real time” presence.

As in most social movements before them, people of color in the atheist and humanist movements are constantly being called on to school, teach, and otherwise “mentor” white folks wanting guidance on matters of race and “diversity.” Such tutorials can get tiring and enraging for even the most patient “native informant” guiding her charge out of the “Eden” of innocence and white entitlement. Reflecting on her experiences working with predominantly white humanist organizations, Mercedes Diane Griffin of the [Institute for Humanist Studies] recounted the ritual of “turned heads” whenever she enters the room at humanist conferences. Accustomed to being the sole person of color at many of these confabs, she believes that the Eurocentric emphasis of humanist atheist discourse is symptomatic of the racial schisms within American society as a whole. Noting that the contributions of women are also given short shrift in leading secular organizations she commented that:

(The) [American Humanist Association] and Secular Coalition of America…are best suited to normalizing humanism within the broader context. These organizations are the most progressive in terms of engaging women and younger people in the movement and in leadership roles. However many of the other organizations are dominated by older people and it is very much a good old boy’s network. When women speak it’s as if they’re talking to the wall. People don’t second their motions, people challenge their authority. The issue of women not being taken seriously in the humanist movement is very real. Women are not brought in as speakers, they’re not in leadership roles. Humanist organizations need to adopt a concrete plan of action to make women visible in the humanist secular movement.”

Similarly, Naima Cabelle, a long time activist in the Washington D.C. secular humanist and atheist communities, notes, “I’m concerned about the entrenched white male establishment found in national secular organizations. There seems to be no room for any form of leadership other than their own; no room for any ideas other than their own. Likewise…too few African American atheists have come forward to actively support efforts to promote atheism, build alliances and friendships even with each other, and to begin to work to build a foundation which promotes transparency, openness, diversity, and activism in the secular community.”

Being marginalized is not a revelation for most African American, Latino, Asian, and Native American folk accustomed to invisibility in all white institutions. For example, despite conservative claims of a left wing academic “mafia,” buttressed by preferential treatment toward so-called minorities, American academia remains a largely white preserve powered by cronyism, favoritism, and affirmative action for white elites. The majority of tenured faculty, permanent administrators, presidents, and chancellors at American universities are white. The struggle that academics of color frequently face getting hired and getting tenure has negative consequences (particularly in predominantly white fields like science and engineering) for recruitment and retention of students of color. Tenure, publication, conference presentations, and participation in committees determine status, visibility, and career longevity in the academic community. All are key factors in the dissemination of scholarship. So it is no coincidence that many of the major figures and spokespersons in the humanist atheist movements come from academia (such as Oxford, Tufts, Stanford, and the University of Minnesota), where they have benefited from the ivory tower politics of faculty recruitment, hiring, and tenure. Yet for some reason many white atheist humanists believe that just being an atheist magically exempts them from the institutionally racist belief systems and practices of the dominant culture. In other words, why the hell do we need to be culturally proficient when we’re the masters of the universe?

Cultural proficiency is an approach that is used to train educators about the influence of culture on teaching and learning. It is based on the belief that there is a dominant culture that affords advantages and disadvantages to individuals and communities based upon race, gender, sexual orientation, and class. It holds that these advantages and disadvantages come from systemic institutional practices, and not what white anti-racism activist Peggy McKintosh has characterized as “individual acts of prejudice.” In this regard “systems of oppression and privilege are the societal forces that affect individuals due to their membership in a distinct cultural group. Systems of oppression do not require intentional acts by perpetrators; they can be the function of systemic policies and practices.”

Becoming culturally proficient involves more than just acknowledging that racism exists, and being able, as a white person, to move on. More specifically it involves developing critical consciousness about how white supremacy (in concert with other systems of advantage and disadvantage) informs the way power and authority are constructed locally, nationally and globally. Greta Christina summed up the prevailing attitude of whites irritated with critiques about the whiteness of the atheist movement as “How dare you accuse me of unconscious racism and sexism — I’m not the problem, the unique personality and culture of women and people of color is the problem?”

And why would it be otherwise when American society naturalizes white supremacy? During the AAI convention an older white man approached me and lamented how wrongheaded religious blacks were. Speaking in a hushed confidential tone, he proceeded to tell me that religion was the primary cause of intimate partner violence among African Americans. It was a tragedy that more blacks didn’t realize it. He was clearly an expert on all things Negro because he’d taken black history classes in college, a tidbit that he revealed in parting. In the era of Obama and hip hop, becoming an “expert” on blackness doesn’t require any special talent. It is one avocation that many whites seem eager to claim as existential sport and national obsession, salting their dialogue, when they want to be bold, nasty or dangerous, with “black” dialect, “black” inflections, and “urban” pop culture references. Blackness is a body of knowledge, because as Frantz Fanon said, “the white gaze, the only valid one is already dissecting me. I am fixed.” In his classic meditation Black Skin White Masks, Fanon considers the violence of the white gaze as a means of asserting universal subjectivity, transforming black bodies into objects of knowledge. Hence, Western empirical traditions enshrine blackness as a known object while whiteness remains epistemologically “mysterious.”

It’s sad to say, but I’m still surprised when women tell me about sexist things that have happened to them in the atheist community — I’m surprised because I didn’t notice them happening. An awkward stare, a dismissing of an idea, a degrading comment, a full-on proposition, whatever. I feel like I should be more cognizant when those things happen as someone who’s aware of the problem, but it turns out I’m as guilty of ignorance here as anyone else. Even as a minority myself, I can’t claim to know what it’s like being a black atheist.

So I can’t wait for this book to come out. It’s a perspective I’m not used to hearing about and I’m sure I’ll learn a lot from it.

You can get your hands on a copy of the book, but it won’t be easy.

I’m asking for your stories.

Tell us about a time when you felt excluded from an atheist group. Or a story about someone you know who felt excluded. Or, hell, a story where you were the one doing the excluding (knowingly or not).

Or perhaps a group you were involved with did something to make sure people didn’t feel excluded. What did you do?

In any case, if you’re living in the US and you’d like to be in the running for a copy of the book, just put the word “jacket” at the end of your comment and I’ll contact you next week if you’re the winner!