4 in 10 Americans Are Completely Delusional About Evolution December 19, 2010 Guest Contributor

4 in 10 Americans Are Completely Delusional About Evolution

According to a new poll from Gallup, 40% of Americans believe in strict Creationism — that a god created us in our present form under 10,000 years ago.

Meanwhile, the number of people who live in reality is only slightly up from previous years — we’re now at 16%. (Keep in mind, though, that the poll has a margin of error of 4%.)

The 38% of people who hold the silly view that evolution occurs thanks to a god’s “guiding hand” are just guilty of wishful thinking. But if these results are accurate, it puts the number of people who don’t accept what the facts tell us at nearly 80% of the population. We’re among the worst countries in the Western world when it comes to science education in this regard.

It’s also no surprise that there’s a strong correlation between the amount of education you have and whether you accept scientific truth:

The same principal applies to people who attend church — the more you go, the more likely you are to be deluded about evolution. (The poll shows that 2% of Americans attend church weekly but don’t believe a god played a role in human evolution… who are these people? Are they all atheists who go to church for some ulterior reason? Or are there actually Christians who don’t think a god had anything to do with evolution?)

Things like this are why atheists and scientists need to speak out against the nonsense taught in church. Knowingly or not, pastors are lying to you about how the world works. The truth is incredible, awe-inspiring, and more fascinating than anything the Christian god is thought to have done. But religious officials too often try to steer people away from that. As the study shows, many religious Americans can’t bring themselves to accept the truth of evolution without somehow incorporating supernatural involvement.

There is a real war on science in this country. We have to keep writing about this stuff. We have to keep talking about it with our family and friends, in the classroom and over dinner, or whenever the opportunity arises. That’s the only way we’ll ever begin to counteract the damage these religious leaders are inflicting upon science.

I’d love to see a Gallup poll in a couple years that looks like this… can we please make it happen? 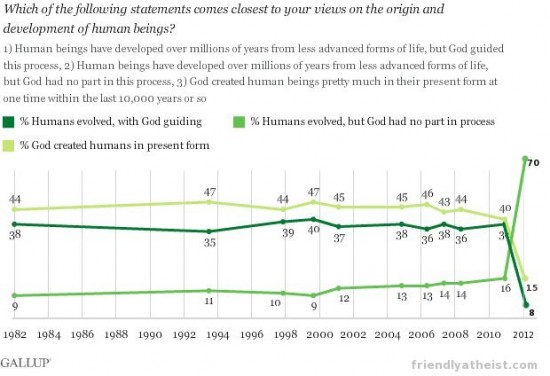 (One of these years, I’m going to learn real Photoshopping skills…)

December 19, 2010 Christian Group Executes Santa
Browse Our Archives
What Are Your Thoughts?leave a comment