I Was on a Christian Radio Show… December 15, 2010 Guest Contributor

I Was on a Christian Radio Show…

Yesterday, I was a guest on a Christian radio show.

Before you listen to it, understand how this even happened. I got an email from the show’s producer a couple weeks ago:

I checked out their website and got a quick sense of the type of show they put on. The host was a conservative, Christian, evolution-denier, etc. I wasn’t optimistic, but I still like to think something productive can happen if they’re willing to reach out to me. So fine, I said yes to doing the show. I just wanted to make sure I knew the nature of the conversation they wanted to have…

I thought that was a reasonable request. I’m not a science expert (and don’t claim to be) and I don’t really enjoy formal religious debates. But if you want to have a real conversation about churches and stereotypes, I’m all for it. 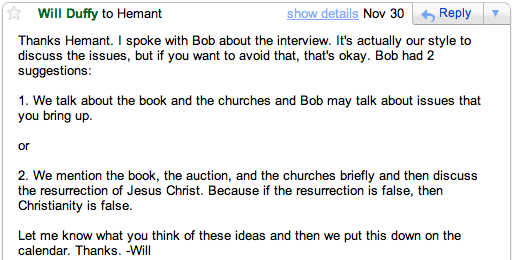 Ok, fine. Don’t really care much for the whole Resurrection answer, but Option 1 works. We rescheduled the interview day because of some conflicts and spoke yesterday.

You can hear the first part of our conversation here.

Am I surprised? No. I suppose I knew it would degenerate into that — it’s happened a few times before. I’m used to the Christian Bait-and-Switch by now.

But would it be so terrible for Christian media types to actually want to discuss how outsiders view their churches? I think that’d be an interesting conversation to have without having to slide into long-debunked Christian talking points.

If you get a chance to hear the interview, I’d love to hear your thoughts. I’m sure there were moments you wanted to yell at the audio…

December 15, 2010
His Christian Views Didn’t Work Against Him
Next Post