Mark Juddery has a ridiculous article on the Huffington Post (surprised?) discussing the “10 Most Overrated Things of the Decade“… 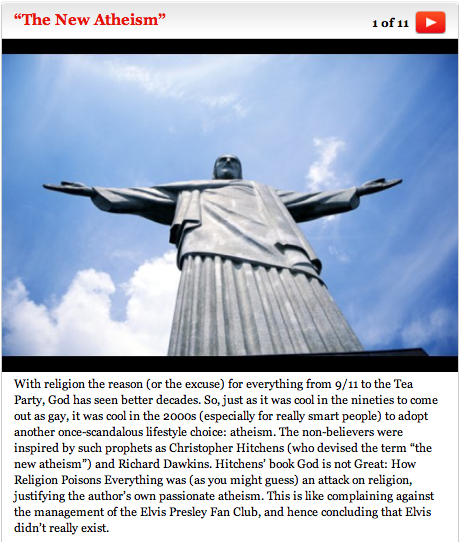 … just as it was cool in the nineties to come out as gay, it was cool in the 2000s (especially for really smart people) to adopt another once-scandalous lifestyle choice: atheism… [Christopher] Hitchens’ book God is not Great: How Religion Poisons Everything was (as you might guess) an attack on religion, justifying the author’s own passionate atheism. This is like complaining against the management of the Elvis Presley Fan Club, and hence concluding that Elvis didn’t really exist.

That argument needs to stop being made. If the Elvis Presley Fan Club had damn near all the power in the government and constantly tried to pass irresponsible, unconstitutional laws designed to promote Elvis merchandise, you’d be pissed off, too.

Also, we have video/recordings of Elvis. Unlike some Jesuses I can think of…

Part of me wonders how we can be overrated when our biggest names are unknown to the majority of the population. I kind of feel like Ross from Friends: When were we underrated?

We’re not overrated. We have a long way to go before we’re worthy of that title.

Meanwhile, you want to know who is overrated?

BOO-YA! I just atheist-juked you.

(Thanks to Scott for the link!)

December 12, 2010 A Brief Homage to Atheist Billboards
Browse Our Archives
What Are Your Thoughts?leave a comment