The Cherokee County School District in Georgia thinks it’s a good idea to have graduation in the First Baptist Church of Woodstock. Not because it’s a religious place, of course. No, no, no… it’s tradition. They’ve done it since 2005. So they have to keep doing it, see?!

(By the way, just ignore the massive cross in the back of the worship space…) 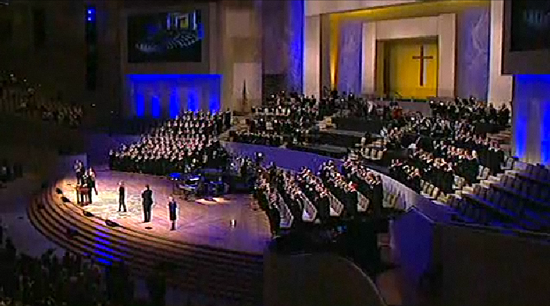 Americans United for Separation of Church and State has threatened the district with legal action if it does not find an alternate secular location to conduct the graduations.

The county school board last Thursday postponed until its Jan. 20 meeting a vote on whether to move the ceremonies.

A little more on the story — AU actually sent a letter to the school last year essentially saying “Move the ceremony or face a lawsuit.”

The district responded by saying they needed time to find an alternate venue, so would it be ok to hold the 2010 graduation in the church with a promise to scope out other places for 2011?

AU felt that was reasonable.

But now, several months and one graduation service later, the district is no closer to finding a venue:

Over the past year, the District identified five potential venues, all of which are either too small, too expensive or not available…

Too bad, says AU (rightly, in my opinion). We gave you time. You figure this out. Cost doesn’t trump the Constitution.

(I would imagine losing the lawsuit would cost the district far more than a graduation ceremony would, anyway…)

You can guess the majority reaction from the locals:

Roxanne Hogue of Woodstock, the mom of a senior at Woodstock High, said she supports the use of the church because of its low cost.

The district pays the church $2,000 for each school’s ceremony at the 7,000-seat facility.

“It’s a win-win situation for everyone,” she said.

Mrs. Hogue added that many families already have spent money on graduation invitations and airline reservations based on the planned dates of the ceremonies. School district officials said it’s unlikely another special events facility could be reserved for the same dates in May.

Mrs. Hogue and Mrs. [Darleen] Prem disagree, noting no one who attends the ceremonies is forced to partake in any religious ceremony.

“It’s only a building to hold a graduation ceremony,” Mrs. Hogue added.

If the only available building happened to be a local mosque, you can bet these same parents would be doing everything in their power to change the venue. But since it’s a church that pushes their beliefs, they don’t see any problem with it.

It’s not that this is just a secular auditorium that happened to be in a church. In addition to the cross above the stage, one reader who attended a graduation in the district told me (though I have not been able to verify):

[The] pastor came on with a nice “Come to church and meet Jesus” video message just before the actual event.

If that’s true, there’s no argument. This is illegal.

Even if that wasn’t the case, the school should keep working to find a better venue. AU should continue keeping the pressure on until the district does the right thing.

One positive note to all this is that a reporter interviewed a local atheist leader, Ken Riddle, co-founder of the Cherokee County Secular Family Network, to get his take on the controversy.

Riddle, who has one child in elementary school in the school district and a younger child, said the church’s sanctuary is an “inherently religious setting.”

He urges people supporting the use of the church to look at the other side of the coin.

“A number of people in the community just don’t know what it’s like to be in the minority,” he said.

Ken actually has a wonderful history of this case on his blog — and he explains how he handled prepping for the conversation with the reporter. It may not sound like a big deal but it can be nerve-wracking the first time a reporter says she wants to speak with you. Ken handled it wonderfully.