The latest battleground state in the church/state separation war is (surprisingly) Hawaii.

On April 29th, 2010, Mitch Kahle of the Hawaii Citizens for the Separation of State and Church and Kevin Hughes protested an invocation prayer in the Hawaii State Legislature:

When Senate President Colleen Hanabusa introduced a reverend to say the invocation, Mitch Kahle stood from his seat in the gallery of the Senate chambers and said, “I object. My name is Mitch Kahle and I object to this prayer on the grounds that it’s a violation of the first amendment of the constitution of the United States. I object.”

Kahle’s protest lasted about seven seconds. Then he stopped talking and sat down…

But the Sergeant at Arms wanted him to leave, Kahle resisted, and the resulting skirmish was all caught on tape — watch it the whole way through:

But did they put up a fight and start the whole physical part of the encounter?

Check out this video from a different perspective:

He made his 7-second protest and sat down. A very peaceful protest. It was Ben Villaflor, the Senate Sergeant-At-Arms (and former boxer), who escalated the physical violence. 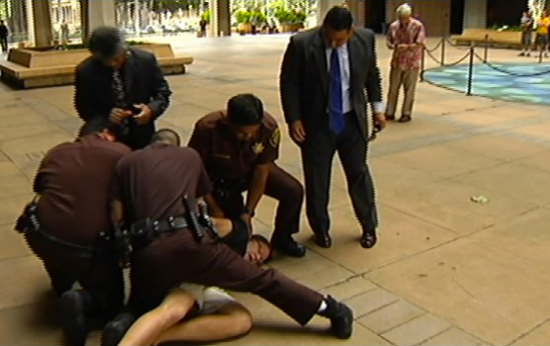 I’ll be the first to admit that I’m not a fan of the “let’s interrupt you while you speak” form of protest. But Kahle was only vocal, not violent. And the state law permits that type of outburst. Not only that, this was not a bland, non-denominational prayer. This was prayer in Jesus’ name and that is, indeed, unconstitutional. The government cannot favor one religion over another and that was clear violation of the law. (Don’t believe me? Substitute “Jesus” with “Allah” and tell me how that would’ve gone over.) Kahle was right.

On November 17th, however, a judge found Kahle not guilty:

“Number one, there was no disorderly conduct. Number two, he has a first amendment right to speak in a public forum such as he did. And number three, the legislature was violating our U.S. Constitution as well as the Hawaii constitution by having these invocations,” [Kahle’s attorney William] Harrison said.

Kahle was interviewed on FFRF’s Freethought Radio over the weekend and explained his side of the story:

There’s no reason to have a prayer before the government begins business for the day. If government officials want to pray, they can do it in their offices before walking into the capitol building. It’s that easy.

Kahle did something courageous and he was assaulted for it. At least now, he’s been somewhat vindicated. It’d be better if the state government decided not to say a prayer at all as a result of this.

December 5, 2010
Guess Who Else Adopted a Highway?
Next Post