Christian Group Says Jesus is Coming Back… Let’s See Them Back It Up December 2, 2010 Guest Contributor

The fans of Family Radio Inc., a Christian radio network, have sponsored dozens of different billboards in select cities around the country proclaiming the exact date when Jesus is coming back. 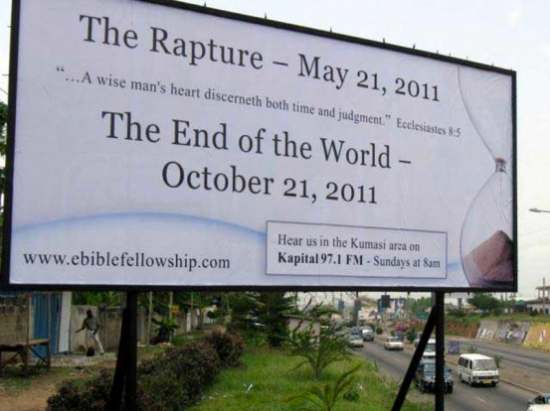 The Rapture is going to be a great day for God’s people but awful for everyone else, said Allison Warden, 29, who orchestrated Nashville’s billboard campaign. She’s a volunteer with WeCanKnow.com, a website set up by followers of Family Radio. She and other fans designed the billboards, along with T-shirts, bumper stickers and postcards to get Camping’s predictions out.

Warden traveled from her home in Raleigh, N.C., to Nashville last week to check out the billboards, purchased through the end of the year. She wouldn’t say how much they cost or name who paid for them.

She is absolutely sure that Camping’s prediction is right.

According to [Family Radio founder Harold] Camping’s prediction, the Rapture will happen exactly 7,000 years from the date that God first warned people about the flood. He said the flood happened in 4990 B.C., on what would have been May 21 in the modern calendar. God gave Noah one week of warning.

Since one day equals 1,000 years for God, that means there was a 7,000-year interval between the flood and rapture.

“We hope that anyone would get a Bible out and try and prove that this is wrong,” he said.

Of course, none of them are serious about what they’re saying.

If they are serious, let’s see them put their faith to the test.

I want to know now what these Christians are going to say/do when the Rapture doesn’t happen.

I want Family Radio to promise to go off the air if the Rapture doesn’t occur on the predicted date.

I want them to commit to giving a certain amount of money to Foundation Beyond Belief on May 22nd if they’re wrong. (I promise we’ll only ask them to honor their pledge if Jesus didn’t appear…)

I want a promise that they’ll film a video while saying, “My God, My God, Why Hast Thou Forsaken Me?” while wearing banana costumes. It’ll be put up on YouTube on May 22nd… but only if they’re still around.

But they won’t do any of this.

The question is: is it because their faith is that weak or because they secretly know that their claims are pure bullshit?

I sent them an email asking what they plan to do if/when the Rapture doesn’t happen.