American Atheists recently put up this billboard on the New Jersey side of the Lincoln Tunnel:

Now, Bill Donohue and the Catholic League have responded with this billboard on the New York City side of the Lincoln Tunnel: 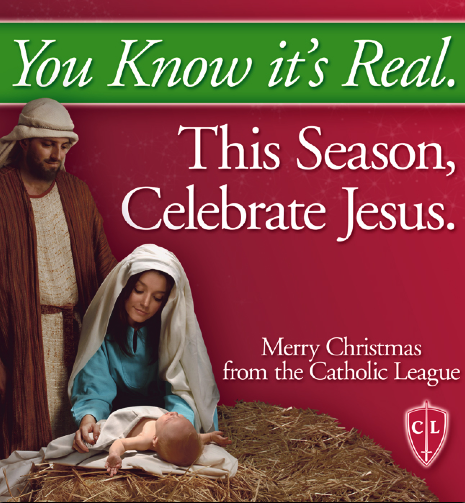 We decided to counterpunch after a donor came forward seeking to challenge the anti-Christmas statement by American Atheists. Our approach is positive, and services the common good. Theirs is negative, and is designed to sow division. It’s what they do.

So after Christian motorists have had their sensibilities assaulted as they exit New Jersey, they will experience a sense of joy, and satisfaction, as they enter New York City. It’s what we do.

The atheist billboard is far from negative. It’s a call for honesty and an urging for atheists to come out of the closet.

If your sensibilities are “assaulted” by a sign that simply points out that your beliefs are a myth, I don’t know how you get through the day. You might disagree, but that should be the extent of your concern.

Meanwhile, the Catholic League billboard tells Christians nothing they haven’t heard before. Maybe some of them will smile as they see it, but it’s not going to have a long-lasting effect.

One bright side to the new billboard: It will ensure that AA’s president Dave Silverman remains in the media spotlight for another day or two as he gets inundated with interview requests.

So, thanks for that, Bill!

December 1, 2010 Kentucky’s Governor Announces Expansion of Creation Museum
Browse Our Archives
What Are Your Thoughts?leave a comment