Did Father Lose Custody of Children Because of his Agnosticism? November 21, 2010 Guest Contributor

Did Father Lose Custody of Children Because of his Agnosticism?

How depressing is this story…?

An Anderson father says that because he professed religious doubt in a custody hearing, a judge took his children from him.

Craig Scarberry, 29, this month was stripped of joint custody of his three children, Kaelyn, 7; William, 6, and Ayvah, 4, because he changed his religion from Christian to agnostic.

“I’m a good, loving father, and this ruling has taken my children away,” Scarberry said. “I wasn’t interfering in their right to be brought up in a Christian environment,” he said, noting that the children still attend Christian school and church services as they have done in the four years that he has had joint custody.

Here’s an excerpt from the court order (found in full here, here, and here), in which the evidence for the decision is discussed (Note #10 and #12): 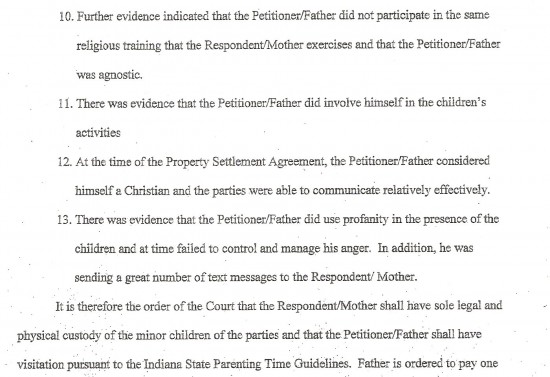 There is more to the decision, but I can’t understand why religious belief was a factor.

For now, Scarberry has until December 1st to appeal the ruling. He has scheduled a demonstration a couple weeks after that:

A Navy veteran and health-care worker, Scarberry has obtained a permit for a demonstration in support of fathers’ rights for Dec. 16 at the Madison County Courthouse. He said he believes his religious liberty has been violated.

Has his religious liberty been violated? Am I missing something else major?

November 21, 2010
What Do You Say When an Agnostic Sneezes?
Next Post