Peter LaBarbera: Why Did a Gay Man Get Treated with Respect?! November 19, 2010 Guest Contributor

Peter LaBarbera: Why Did a Gay Man Get Treated with Respect?!

Anti-gay activist Peter LaBarbera is pissed off at my local public broadcasting station because it aired an interview with sex columnist Dan Savage and treated him like a human being: 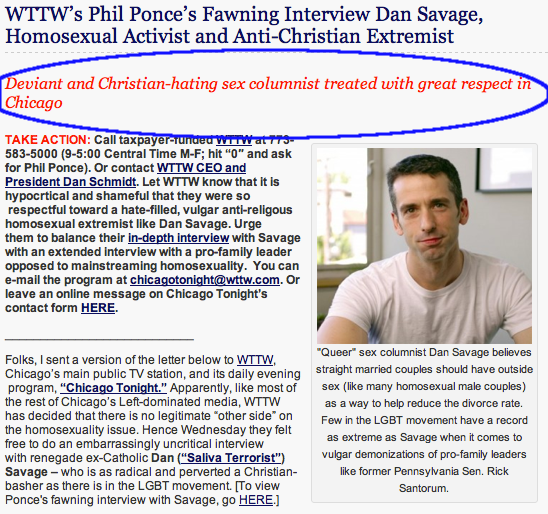 I saw Phil Ponce‘s interview and it was fantastic:

Sex positivity, a brain, a sense of humor, and the courage to speak out against religious bigotry has earned Dan Savage some well-deserved respect whether or not you agree with everything he says.

Irrational fear of homosexuality and an insistence that public broadcasting networks give equal time to hate-mongerers will only get you traction within the subset of Christianity that reeks of contempt and acrimony.

We’ve already seen the kinds of lies that LaBarbera enjoys spreading via his organization. It’s no surprise that credible journalists aren’t rushing to his office door.