Texas A&M just had anti-abortion protesters come their way, followed by campus preachers. But members of the Agnostic and Atheist Student Group (AASG) were ready for them 🙂

The Rally to Restore Sanity mindset was clearly present. Keri Bean, the president of the secular student group, explained it this way (with pictures of group members interspersed):

… I got together about 10 of the students in AASG and decided to do some Pastafarian/atheist outreach on Thursday with the intention of saying “Hey, it’s ok to have a different view on campus!”

I showed up to the Academic Plaza (one of our free speech zones at the center of campus) with a few signs saying things like “I’m an atheist but religious people are cool too!” and “You’re not going to hell. However you’re not going to heaven either!” I wore a t-shirt that said “Smile! 🙂 You just met an atheist” and some of my group wore the AASG t-shirts that had arrived that day, conveniently enough! (Obviously the Flying Spaghetti Monster coordinated that one.) 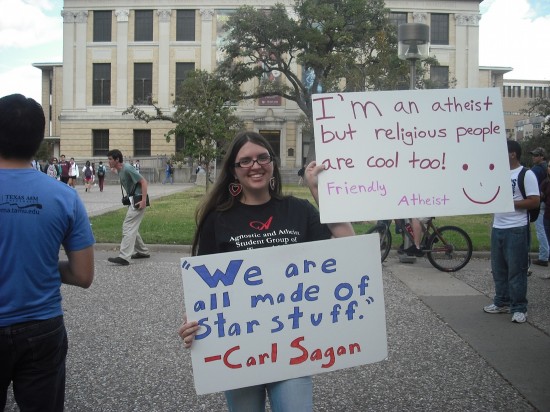 They had a lot of the standard Living Waters materials (including a sheet explaining the banana argument!)… One of them yelled out “There’s no such thing as an atheist! Atheists don’t exist!” I proceeded to poke myself and say “I’m pretty sure I exist, sir.”

He walked away for a little bit, but then came back, stood about 5 feet away from me, and VERY loudly yelled the same thing. I yelled back my same response. He then went into the questions routine (Have you ever lied? Have you ever stolen something? etc.) and since I had heard that routine before, I had some pretty entertaining responses.

At this point a crowd really started to gather and some of the students passing by either joined our side or started yelling back things. At one point I’m pretty sure we had well over 100 people around us. I let the crowd heckle the preachers for awhile. We occasionally interjected with Pastafarian goodness, and at one time my boyfriend preached the “Eight I’d Really Rather You Didn’ts.” We also shouted “Have a great day!” as people walked by. 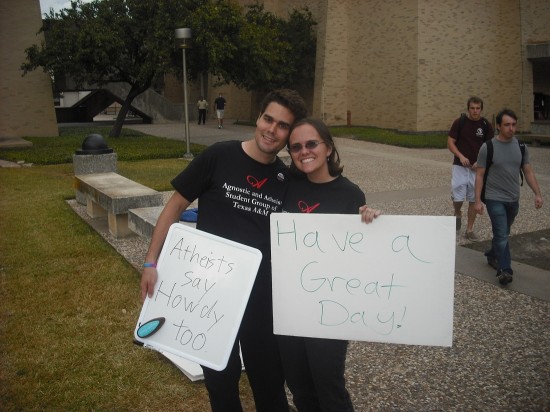 We found out they would be there the next day too, so we got back out there around noon, and this time we must’ve gotten our point across because after about 20 minutes of screaming, they quieted down and talked to people one-on-one, so no large crowd this time.

We had more signs this time, saying things like “Have a great day!” and “Atheists say howdy too!”

My boyfriend brought a whiteboard so we could post responses during the screaming. After they stopped screaming, we wrote things like “Free hugs!” on it. Their wives (in very Mennonite-type clothing) came up to us and tried to convert us. They left around 3, and as they walked away, they yelled “See you on judgement day!” and we yelled back “We love you too!” Shortly after they left, a few student preachers from Grace Bible Church (the church that [defeated member of the Texas state Board of Education] Don McLeroy attends) talked to us and tried to convert us, but we shut them down pretty quickly. 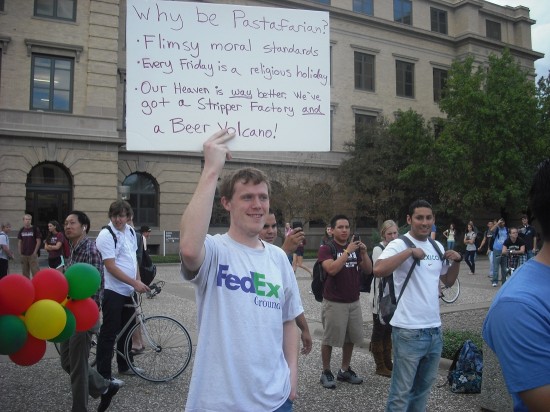 We had a LOT of students come up and try to convert us or pray over us. However, for about every conversion attempt, we had at least two people, religious or not, come up and say they really appreciated what we were doing. We had at least three Christians actually join us in our protest. We had an AASG meeting that night and had at least 10 new faces. I’m hoping we even get more!

Thankfully, we live in a time when, if you know the campus preacher is coming out, you show up with a video camera 🙂

This is a sampling of what went down:

It’s amazing how ineffective this guy is at converting people, isn’t it? There’s a circle of people mocking him — something I’m sure he takes pride at — but I don’t see anyone running up to him to be saved… or even to join him. And I doubt anyone’s going to change their mind in the future, unless they begin to think even less of Christians than they do now.