The Historicity of Jesus

I’m no Jesus expert, but David Fitzgerald has been studying his existence for over a decade. He’s just released a new book: Nailed: Ten Christian Myths That Show Jesus Never Existed at All. 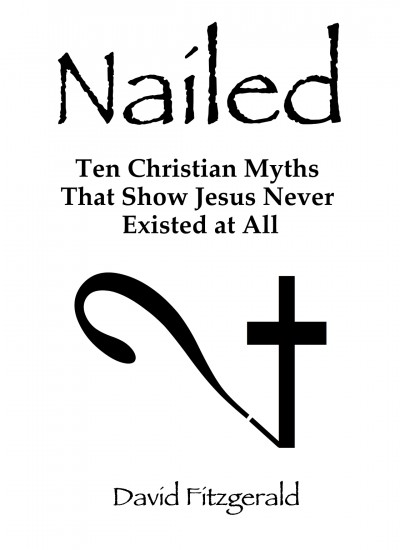 Check out the exclusive excerpt below and stick around for a chance to win a free copy of the book!

Didn’t There Have to Have Been a Jesus?

Most people have never heard of the ancient Greek mythographer Euhemerus, who first theorized that the gods of mythology were deified human beings, and their myths based on legends sprung from accounts of real people and events. So many might be surprised to find that they are Euhemerists on the subject of Jesus. That is to say, though they may not believe Jesus was the divine Christ that Christianity venerates as the Son of God and savior of the world, and may regard accounts of the miracles and wonders attending him as mere legendary accretion, nevertheless they certainly believe there had to have been a central figure that began Christianity.

Perhaps he was just a wandering teacher or an exorcist, an apocalyptic prophet or a zealot who opposed the Romans. Perhaps he was all these things, or even a composite of several such early first-century figures; but at any rate, surely there had to be somebody at the original core of Christianity, arguably the most famous individual in human history. All this seems to be a perfectly reasonable, completely natural assumption to make -– so why would anyone be so foolish as to propose that Jesus never existed?

Doesn’t it just make more sense to assume that there was a historical Jesus, even if we are unable to recover the real facts about his life and death? As it turns out, no. The opposite is true: the closer we look at the evidence for Jesus, the less solid evidence we find; and the more we find suspicious silences and curious resemblances to the pagan and Jewish religious ideas and philosophies that preceded Christianity. And once you begins to parse out the origins of this tradition or that teaching from their various sources, the sweater begins unraveling quickly until it becomes very difficult to buy that there ever was –- or even could have been –- any historical figure at the center.

Christianity, like all religious movements, was born from mythmaking; and nowhere is this clearer than when we examine the context from which Jesus sprang. The supposed historical underpinning of Jesus, which apologists insist differentiates their Christ from the myriad other savior gods and divine sons of the ancient pagan world, simply does not hold up to investigation.

On the contrary, the closer we examine the official story, or rather stories, of Christianity (or Christianities!), the quicker it becomes apparent that the figure of the historical Jesus has traveled with a bodyguard of widely accepted, seldom examined untruths for over two millennia…

It’s true enough that the majority of Biblical historians do not question the historicity of Jesus -– but then again, the majority of Biblical historians have always been Christian preachers, so what else could we expect them to say? For all their bluster, the truth is that for as long as there have been Christian writings, there have been critics who have disputed Christian claims and called events from the Gospel stories into question. And since at least the 18th century a growing number of historians have raised serious problems that cast Jesus’ historicity into outright doubt, as we’ll see.

For instance, historian Richard Carrier has pointed out the problems with Christian apologist Douglas Geivett’s claim that the evidence for Jesus’ resurrection meets “the highest standards of historical inquiry,” and is as certain as Julius Caesar’s crossing of the Rubicon in 49 B.C.E. Carrier notes, “Well, it is common in Christian apologetics, throughout history, to make absurdly exaggerated claims, and this is no exception.” Then he compares the evidence for both events:

First of all, we have Caesar’s own account. In contrast, we have nothing written by Jesus, and we do not know who really wrote any of the Gospels. Second, many of Caesar’s enemies reported the crossing of the Rubicon. But we have no hostile or even neutral records of the resurrection until over a hundred years after the supposed event, fifty years after Christian beliefs had become widely known. Third, there are numerous inscriptions, coins, mentions of battles, conscriptions and judgments, which form an almost continuous chain of evidence for Caesar’s entire march. But there is no physical evidence of any kind in the case of Jesus.

Fourth, almost every historian of the period reports the Rubicon crossing, including the most prominent of the Roman age: Suetonius, Appian, Cassius Dio and Plutarch. Moreover, these scholars have shown proven reliability, since a great many of their reports on other matters have been confirmed with material evidence and in other sources. In addition, they all quote and name many different sources, showing a wide reading of the witnesses and documents, and they consistently show a desire to critically examine claims for which there is any dispute. If that wasn’t enough, all of them cite or quote sources written by witnesses, hostile and friendly, of the Rubicon crossing and its repercussions.

But not a single historian mentions the resurrection until the 3rd and 4th centuries, and then only Christian historians. Of the anonymous Gospel authors, only “Luke” even claims to be writing history, but neither Luke nor any of the others ever cite any other sources or show signs of a skilled or critical examination of conflicting claims. None have any other literature or scholarship to their credit that we can test for their skill and accuracy. Their actual identities are completely unknown, and all overtly declare their bias towards persuading new converts.

Finally, the Roman Civil War could not have proceeded as it did if Caesar had not physically crossed the Rubicon with his army into Italy and captured Rome. Yet the only thing necessary to explain the rise of Christianity is a belief — a belief that the resurrection happened. There is nothing that an actual resurrection would have caused that could not have been caused by a mere belief in that resurrection. Thus, an actual resurrection is not necessary to explain all subsequent history, unlike Caesar’s crossing of the Rubicon. Carrier concludes that while we have many reasons to believe that Caesar crossed the Rubicon, all of them are lacking in the case of the resurrection:

“In fact, when we compare all five points, we see that in four of the five proofs of an event’s historicity, the resurrection has no evidence at all, and in the one proof that it does have, it has not the best, but the very worst kind of evidence — a handful of biased, uncritical, unscholarly, unknown, second-hand witnesses. Indeed, you really have to look hard to find another event that is in a worse condition than this as far as evidence goes.”

So even before we begin to examine Jesus’ resurrection, we are forced to recognize that the historical evidence for it, and all the other extraordinary events of Jesus’ career, is not only far from ironclad, but already suspect. So there is nothing unreasonable about taking a skeptical approach to the Gospels’ image of Jesus in the first place. And it’s important to note that we are not just talking about the divine man-god Jesus coming under fire, because it is not just the supernatural aspects of Jesus that have come under suspicion. Even the mundane and perfectly plausible-sounding aspects of Jesus’ life have proved to be problematic…

Want a free copy of the book?

All you have to do is name another historical figure who may not have existed… along with your evidence! The more amusing, the better 🙂

Put the word “spork” at the end of your response if you’d like to be considered for the prize. (You must live in the U.S.)

A random drawing will occur next week.

In the meantime, you can learn more about the book on its Facebook page.