Are Atheist Groups Competing with their Advertisements? November 10, 2010 Guest Contributor

Are Atheist Groups Competing with their Advertisements?

The New York Times has a piece in Wednesday’s paper about the holiday arrival of atheist bus ads and billboards, including the American Humanist Association’s bonanza from yesterday.

There’s a secondary story about how various non-theistic groups are competing with one-another for members:

That is one reason for the multiple campaigns: the groups are competing with one another to gain market share, said Mark Silk, founding director of the Greenberg Center for the Study of Religion in Public Life, which is also at Trinity College.

“There’s a competitive environment for ‘no religion,’ and they’re grabbing for all the constituents they can get,” Mr. Silk said.

Sure, every organization wants more members, but if that were the main purpose, there are far better ways to find due-paying, card-carrying atheists than to put out tame, usually-inoffensive ads promoting reason over faith that tend to target people who aren’t already hard-core non-believers. The cost of the ads just doesn’t justify that claim.

The reason the ads keep coming is because they’ve been successful at generating publicity. They get the attention of people on the fence about religion, who might be atheists and not even know it. They get news coverage. They find their way into the New York Times.

Hell, the United Coalition of Reason has paid for billboards and bus ads in dozens of cities (including my own) but they have no desire at all for members.

Even if you want to be a member of United CoR, they’d just direct you to the local groups in your city.

These ad campaigns aren’t about cutthroat competition for members. As a current and former board member of a couple of these groups, I can tell you we work together far more than we “compete” — there’s the shared philosophy that a rising tide lifts all boats and we’re better off if we work together.

Not to mention people can be members of more than one atheist organization at a time — and often are.

These bus ads and billboards are part of a larger consciousness-raising campaign. We want atheists out there to know they’re not alone and that there’s nothing wrong with not believing in a god. We want closeted atheists to go public with their non-belief.

I’m surprised a religion reporter missed all that.

At least some of the atheist groups’ leaders can set her straight:

Annie Laurie Gaylor, co-president of the Freedom from Religion Foundation in Madison, Wis., one of the groups running advertisements, said, “We feel the only way to fight the stigma toward atheists and agnostics is for people to feel like they know them, and they’re your neighbors and your friends. It’s the same idea as the out-of-the-closet campaign for gay rights.”

David Silverman, the president of American Atheists, said that the idea of the campaign is to reach people who might go to church but are just going through the motions. “We’re going after that market share,” he said.

He may use the business-like phrase, but the intent there is not to win members for American Atheists. (Like I said, that’s just a bonus if it happens.) It’s to get people who are already atheists to admit as much.

Side note: Anyone notice the cheap dig in the photo caption? 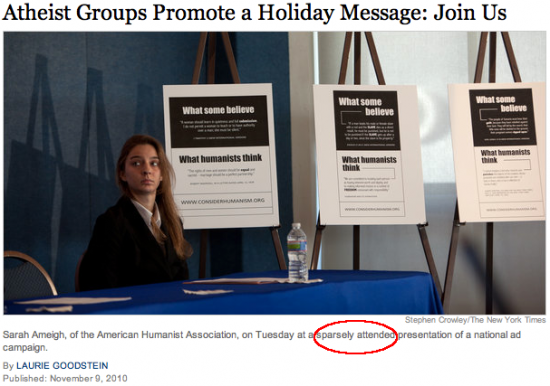