College Atheist Groups on the Rise

The Daily Orange newspaper at Syracuse University had a front page story yesterday about the rise of college atheist groups: 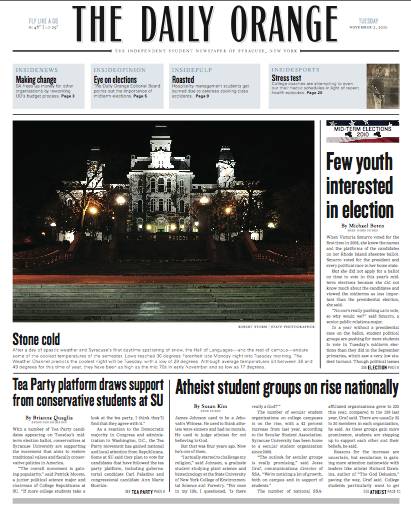 “The outlook for secular groups is really promising,” said Jesse Graf, communications director of SSA. “We’re noticing a lot of growth, both on campus and in support of students.”

The number of national SSA-affiliated organizations grew to 225 this year, compared to the 159 last year, Graf said. There are usually 25 to 30 members in each organization, he said. As these groups gain more prominence, students are stepping up to support each other and their beliefs, he said.

It’s true about the rise of atheism on college campuses, though.

Not only are we spreading to high schools, we’re getting to the point where students go to college expecting there to be an atheist group there. It’s a dramatic (and pleasant) change from even a couple years ago.

I wonder how many people are truly excited at the possibility of us going so mainstream like this. We’re no longer so hard to find on campus… is that always a good thing?