They break it down, too: 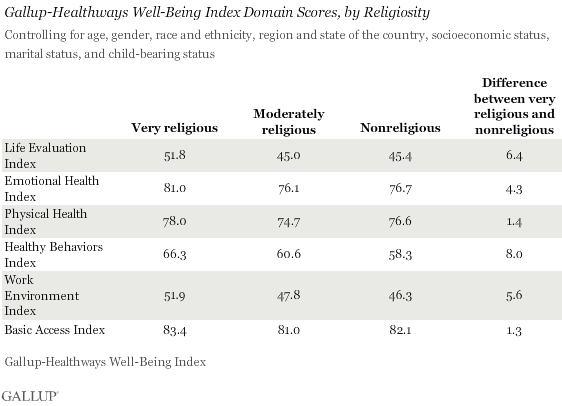 So what’s the explanation? There’s no set answer, but a few possible reasons come to mind:

Religious service attendance promotes social interaction and friendship with others, and Gallup analysis has clearly shown that time spent socially and social networks themselves are positively associated with wellbeing. Religion generally involves more meditative states and faith in a higher power, both of which have been widely used as methods to lower stress, reduce depression, and promote happiness. Religion provides mechanisms for coping with setbacks and life’s problems, which in turn may reduce stress, worry, and anger. Many religions, including Christianity, which is by far the dominant religion in the U.S., embody tenets of positive relationships with one’s neighbors and charitable acts, which may lead to a more positive mental outlook.

No doubt that strong relationships make for a happier life. But I wonder how many of those “strong bonds” involve discrimination against gay people and verbal attacks on atheism.

I would guess that, if asked, the wellbeing of gay people wouldn’t be as high as that of Christians… and the Christians are to blame for much of that.

It should be noted that just because religion “feels nice,” that doesn’t mean religious beliefs are true.

Atheists are interested in the truth, even if those truths are uncomfortable. We don’t hide behind mythology and place our hope in non-existent gods to make ourselves feel better.

October 29, 2010
Jimmy Carter: I Think An Atheist Could Be Elected President
Next Post

October 29, 2010 A Reason Not To Get Married in a Church
Browse Our Archives
What Are Your Thoughts?leave a comment