This is really what the Catholic Church needs right now: A group of people trying to make Catholicism even less inclusive.

The Associated Press reports that conservative Catholic bloggers are trying to hold the church more accountable:

Enraged by dissent that they believe has gone unchecked for decades, and unafraid to say so in the starkest language, these activists are naming names and unsettling the church.

Among [Michael Voris of RealCatholicTV.com’s] many media ventures is the CIA — the Catholic Investigative Agency — a program from RealCatholicTV to “bring to light the dark deeds of evil Catholics-in-name-only, who are hijacking the Church for their own ends, not the ends of Christ.”

In an episode called “Catholic Tea Party,” Voris said: “Catholics need to be aware and studied and knowledgeable enough about the faith to recognize a heretical nun or a traitorous priest or bishop when they see one — not so they can vote them out of office, but so they can pray for them, one, and alert as many other Catholics as possible to their treachery, two.”

Yes, it’s about time someone put a stop to those evil, evil nuns. Step number one: retroactively protest Sister Act.

Truth be told, I think I understand where they’re coming from.

If Catholicism teaches that abortion is a sin, what do you call someone who has an abortion and continues to call herself a Catholic?

If the Pope says something and you just dismiss it, how “Catholic” are you?

If you’re gay, should you really be receiving a Communion wafer in Church?

Obviously, it’s my hope that everyone (Catholics included) stop taking the Pope seriously. I want Catholics to leave the Church in droves and then drop their faith altogether. And I would hope these bloggers agree with me that it needs to become easier to take your name off the Church’s membership rolls if you have no business being in the Church. The fact that it’s so hard to leave just dilutes the church’s “purity.”

But if I were Catholic (and took it seriously), I’d be pissed off if people did exactly the opposite of what my church taught but still clung to the label.

The question I’d love for these Catholic activists — Catholictivists? — to answer is: Do you want to see a church that is growing and accepting of more people? Or a church that is far smaller, more “true” to the Church’s teachings, but possibly less influential as a result?

Side note: When reading an article about a new breed of Catholic activists, it’s pretty goddamn scary to see one of them brandishing a sword: 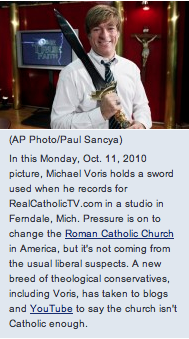