James Leonard is running for a city council seat in Patterson, California, a city of just over 20,000 residents. It’s a local race so you wouldn’t think the vitriol would be too bad…

But the opposition heard Leonard was an atheist/anti-theist and they sent out this mailer (click to enlarge): 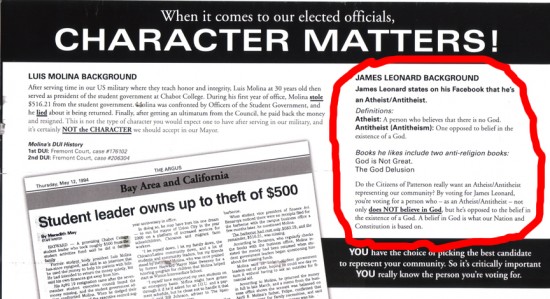 (Also mentioned there is a candidate for mayor who admittedly made mistakes in the past but has since apologized for them. This isn’t about him, though.)

It’s an attempt to make Leonard look bad, but that doesn’t really work when he admits to the charge without a blink, right?

Other candidates might try to fight it when opponents call them an atheist, but Leonard proudly admits it’s true: he’s an atheist and there’s nothing wrong with that:

Yes, I am an atheist. I was raised by wonderful, open-minded parents who did not subscribe to a particular religion and who did not go to church. In my younger years, I believed in God simply because that’s what everyone else seemed to believe. After years of thinking, reading and questioning, I have come to believe that there is no god, and I am comfortable with that belief and all of its ramifications.

Whoever was behind this ad has launched their attack in total anonymity, possibly even violating political campaign finance laws to do it. That’s not character, as far as I’m concerned.

I have never kept my beliefs a secret, but as a candidate, I always felt in my heart that this was a non-issue. I believe what religion a person follows has no bearing on their qualifications for public office, and therefore I have never sought to make an issue out of my non-belief.

Personally, I say religious beliefs should have a bearing on whether people should vote for you, but Leonard seems to be a good guy and this mailer is playing on society’s fear of atheists.

Thankfully, Leonard says the mailer hasn’t hurt him too much:

The support I’ve gotten in town so far has actually been extremely strong, which just validates why my wife and I like it here so much. It remains to be seen what impact it will have at the polls, but I think I’ve addressed it in the best way I could.

That’s good to hear. I would never suggest anyone vote for a candidate simply because he or she is an atheist, but I like the way Leonard’s dealing with this personal attack.

Meanwhile, a local paper, the Patterson Irrigator, has some information on who might have sent out that mailer:

The creator of the mailer tried to place the same advertisement in the Patterson Irrigator earlier this month. A person who identified himself or herself as “Tom Jeffereson” e-mailed the newspaper on Oct. 5 about running a half-page political ad in the newspaper. The Irrigator responded that the newspaper would need full contact information before it could run the ad.

An unknown woman then dropped off $306.15 in cash for the advertisement later that afternoon, but the newspaper did not receive a copy of the ad itself until later that evening.

The Irrigator chose not to run the advertisement after reading it, as the newspaper was not aware of who produced it.

The person who produced the advertisement and gave it to the newspaper has yet to retrieve the money that was paid for it. If the person does not do so, Irrigator publisher Bob Matthews said the newspaper will turn the money over to the state.

Umm… shady. At least it looks like people weren’t falling for it.

So if you live in Patterson, check out Leonard’s website, read his positions on the issues, and consider voting for him next week.