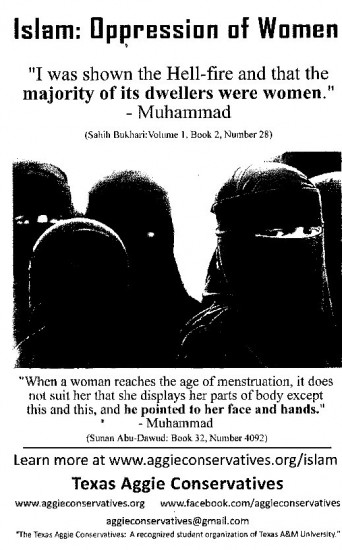 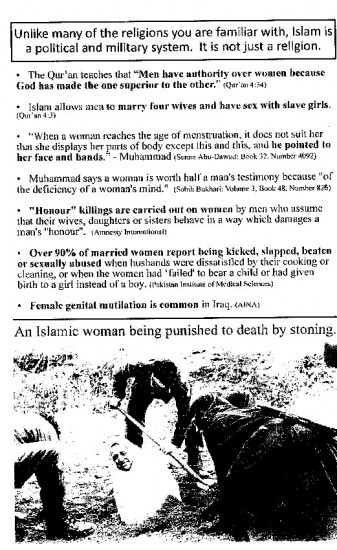 Slightly better (but modified) versions of those images can be found here and here.

I think they’re actually right in one respect — Islam is too often anti-woman. I can’t understand why any woman, given the choice, would want to remain in a faith that treats her as an inferior.

Is Islam the only faith in which women are not treated as equals?

Nope. Christianity’s guilty of poor treatment of women, too:

“Also thou shalt not approach unto a woman to uncover her nakedness, as long as she is put apart for her uncleanness. (Leviticus 18:19) [Translation: Stay away from menstruating women!]

“If a man be found lying with a woman married to a husband, and a man find her in the city, and lie with her… Then ye shall bring them both out unto the gate of that city, and ye shall stone them with stones that they die; the damsel, because she cried not…” (Deuteronomy 22:24)

Are there any other anti-women passages you’d like to suggest? Mark would love to know:

I can pass along [readers’] Bible suggestions to the Aggie Conservatives. It would just be dishonest to ignore heinous quotes from the Bible while highlighting ones from the Koran, so I think we both can rest easily tonight knowing that Texas A&M will soon become aware of a vile religious book whose practitioners vastly outnumber Muslims here in Texas…

Let’s help him out!

October 22, 2010
Freethinkers Respond to Ignorance About Humanist Chaplains
Next Post

October 22, 2010 Visiting Dartmouth This Weekend
Browse Our Archives
What Are Your Thoughts?leave a comment