If I told you a church was getting attention for their new billboard, you might brace for the worst. But here’s an interesting approach. Christ Covenant Church put this $1600 billboard up in Beaumont, Texas: 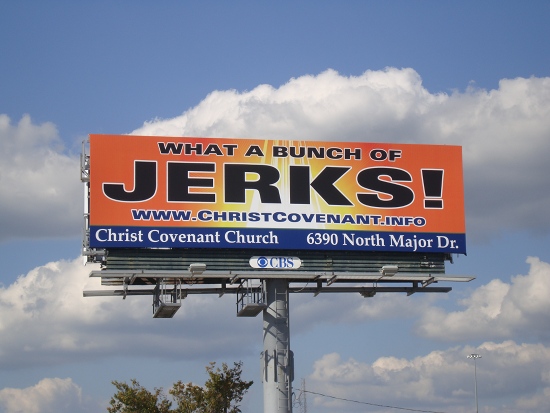 Our failure has left a bad taste in people’s mouths. Our mistakes have led to a lack of credibility. Our messes have caused people to seek answers for this life elsewhere. And really, who could blame people for giving up on the church? Ghandi had a very good point when he said “I like your Christ, I do not like your Christians. Your Christians are so unlike your Christ.”

What a bunch of jerks. Prideful, hypocritical, selfish, judgmental jerks.

At Christ Covenant Church, do you know what our response is? Guilty as charged. We are fed up with it just as much as you are. We’ve failed. We’ve failed you, we’ve failed each other, and the worst part is that we’ve failed to act like Jesus. And it’s time to own up to our failure because only then can we turn it around. So no more sugar coating it, no more pretending.

Oy… I rolled my eyes when I read that.

Christianity has a well-deserved image problem.

But we disagree about what makes Christians “jerks.”

They seem to think it’s only about the actions. Well, if a pastor rails against homosexuality and gets caught with a male hooker, yes, that’s hypocritical and he deserves to be exposed and called out on it. If Christians say they live to help others and then spend millions of dollars on a lavish church building, eyebrows will raise. But hypocrisy like that happens whether you’re Christian or not.

The problem is that many churches act “humble” by saying that Christians are guilty of not being “Christ-like,” but then keep doing the things that make other people dislike them — they just do it with a smile on their face.

That doesn’t make anything better.

I wanted to know what the non-jerky Christians at this church believe. So I wrote to the pastor, Chris Beard.

To his credit, he sent me a long, courteous email explaining (with a lot of detail) what his church believes and what they’re trying to do with the billboard.

He told me he had never picketed a gay club or raged against gay marriage, though he had been guilty of occasionally making gay jokes or laughing at them. He apologized for that.

But what happens when gay marriage is on a ballot? Which way do the people of his church vote? I want to know. Does anyone honestly think they’d support marriage equality? I don’t.

A lot of Christians would never physically/verbally beat up gay people and would admit that the church has treated gay people poorly. Those same people often think homosexuality is still a sin. They wouldn’t vote for gay marriage if it were on a ballot and their church wouldn’t marry gay people if it became legal.

Those people are still jerks.

It’s possible that this particular church rarely brings up the topic of homosexuality… but that’s also a problem. We need churches willing to confront the “jerks” in their faith. On this issue, the sin of omission doesn’t endear me to his church.

This is a church that espouses Creationism. The pastor mentioned some of the typical, repeatedly-debunked arguments you hear from Christians (“there’s evidence of microevolution but no evidence of macroevolution”)… but said he wouldn’t picket a school board about teaching Creationism in the schools.

Well, that’s nice. He limits the delusion to the people he knows. At least that’s a response I can live with — if they want to spread misinformation, at least they keep it to themselves.

The pastor did mention that they do a lot of service work, which I find commendable:

In the Beaumont Independent School District, over 80% of the students are considered “at risk” due to a variety of reasons. So we wanted to know what we could do to help. We contacted the school district and met with the administration of the elementary school closest to our church facility. We have made a commitment to “adopt” that school by providing tutors for children on a weekly basis, encouraging teachers, and providing help in a variety of other ways. For this project we will not be using our church name, or sharing Jesus with students, we will simply be trying to make a difference in that school and in those student’s lives.

That’s awesome. More of that kind of outreach, please.

No doubt there are churches full of hypocritical, selfish, judgmental people. The main problem isn’t the people, though. It’s the messages they continue to spread.

Most Christians I know are not jerks. They’re nice, friendly, decent, hard-working people.

They’re just wrong about many of their beliefs. Many of those beliefs have disastrous consequences for people who mean a lot to me.

You can apologize all you want. You can call yourself “humble,” and rent a billboard, and tell everyone that you’re going to be more like Jesus.

But you’re still indirectly perpetuating lies about gay people, about science, and a whole slew of other things.