Jesus Does Not Care? Tell Me Something I Don’t Know October 16, 2010 Guest Contributor

Jesus Does Not Care? Tell Me Something I Don’t Know 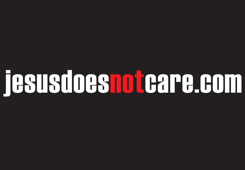 He’s dead. So he can’t. (Talk about flawless logic…)

Unfortunately, a church beat us to the message. And it confused Christians too lazy to go to the website.

A local church’s “Jesus Does Not Care” advertising campaign is really a gospel come-on, but some of the faithful aren’t pleased.

“We actually had someone tear down our sign,” said Brian Swiggart, one of the pastors of The Community at Lake Ridge, a church near the border of Mansfield and Arlington.

Caitlin Smith, a member of The Community at Lake Ridge and a Dallas Baptist University junior, said her roommate was disturbed by seeing a card that says “Jesus Does Not Care.”

“Once she understood it, she was a lot better,” said Smith. “At first, it really did upset her because she thought it was an atheistic campaign.”

Swiggart said the church replaced an 8-foot-by-11-foot “Jesus Does Not Care” sign that someone tore down.

“We kind of take it as someone well-meaning,” he said. “If you just look at the words, you think, `Well, that’s not good. Jesus does care.’”

Let’s get the obvious out of the way: the church’s message is that Jesus supposedly “does not care” about where you come from or what you’ve done in the past. To that point, the pastor is right.

Because Jesus is dead.

(This shouldn’t be news to anyone, right?)

Even if Jesus didn’t care, though, Christians are plenty judgmental on their own so it’s all moot. (You walk into a church and tell them you’re a gay man and see whether they just accept that fact.)

Anyway, there’s another aspect of this campaign that’s more disturbing: Why is it that both the article and the church just gloss over the vandalism as if it’s no big deal? They act as if the ad campaign were put up by atheists, then the destruction would be justified.

If anyone in the Cedar Hill, Texas area has some money, they should swipe up JesusDoesNotCare.net, direct it to an atheist website (or a single serving site that just says “Jesus doesn’t care because he never existed”), purchase similar-style advertisements, and watch the hilarity ensue.

(Thanks to vanweezy for the link)

October 16, 2010
Moment of Silence and Prayer Back in Play in Illinois
Next Post