A Chance to Hear A Giant’s Words Come Alive

A friend of mine, Richard McNally, editor of Rational Alternative, the newsletter of Atheists United will be one of two speakers at a dramatic reading of selected writings by Robert Ingersoll on Saturday Oct. 16 in Santa Barbara, California. I saw his one-man performance of “A Visit with Robert Green Ingersoll” last February, and it was both fascinating and inspiring. If you’re anywhere within reach, I’m sure this recital by two skilled readers in the elegant library will be worth hearing. Below is a reprint of the Humanist Society of Santa Barbara flier: 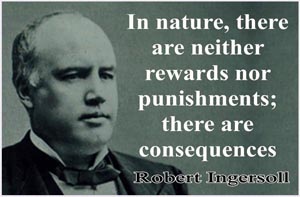 The Humanist Society of Santa Barbara presents dramatic readings of Robert Green Ingersoll, the foremost orator, social commentator and political speechmaker of 19th century America. He was a Colonel leading a cavalry regiment in the Civil War. He became a lawyer and the first Attorney General of Illinois. His national fame came from crisscrossing the country on tour, speaking to packed houses about Shakespeare, Reconstruction, science, religion, and the rights of women and black Americans. Oratory was major public entertainment in those days, and Ingersoll’s inspirational words resonate even today. Come and hear prizewinning local voice talent bring Robert Ingersoll to life.

Free event, open to the public. Optional $2 student or $5 general donations would be appreciated. Information phone 805-689-2716 or website
http://www.SantaBarbaraHumanists.org