When Paul Sullivan‘s company created shirts for the Pope’s visit to the UK, he had high hopes:

In August, Canon Pat Browne, dean of St Chad’s Cathedral in Birmingham, told the BBC: “The producers tell me it will raise somewhere in the region of £50,000 for the papal visit fund.”

The shirts were a combination of the England team colors and the colors of the Vatican Flag. 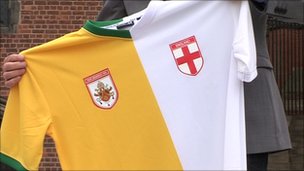 How well did they sell?

Well… just check out the blunt headline at BBC News:

How badly does the Pope (shirt) blow?

A plan to help fund the Papal visit to the UK by selling 20,000 football shirts has failed to hit its target, with only 520 of the £18 shirts sold.

“The Pope won the public over towards the end of his visit but there was hostility and indifference in the early stages and that hit our sales,” he told the BBC News website.

Well done, UK people. You didn’t stop the Pope from coming, but you did put a dent in the merchandising. Silver lining, right?

(Thanks to Malik for the link!)