The 2001 census introduced a new question on religion. It was a single, closed, leading question –- “What is your religion?” –- which produced a very high measure of religiosity compared to all other surveys. Millions of people were counted as religious when their “religion” was only a nominal, cultural affiliation, or just a habitual response to ticking “Christian”.

It’s a simple, yet important, campaign. The BHA is making a simple request:

If you’re not religious we recommend ticking ‘No religion’ for the Census 2011 question on religion.

Ticking ‘No religion’ is better than leaving the question unanswered because this way you count. And it’s better than answering with the religion you were brought up in if you don’t believe in it anymore and don’t think organised religion speaks for you. 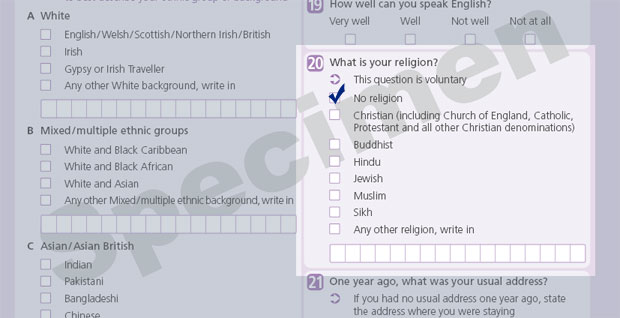 It’s that easy. Why on earth would anyone not participate…?

Well, I’m sure there are a few reasons, but they’re all stretches. Just check the box. And let them know you exist.

Why is this so important? The BHA offers a few reasons:

There’s plenty more information on the website. While you’re reading that — or if you don’t live in Britain — you can also donate to the campaign so that they can advertise the hell out of this.